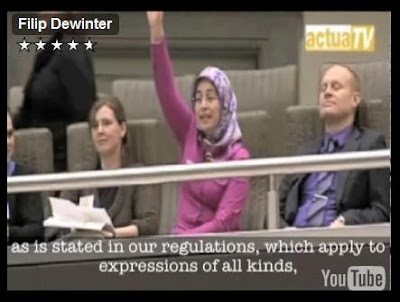 She’s not just any Muslima, she’s connected to the
Muslim Brotherhood and to extremist leftist Walloons
The leader of the Vlaams Belang, Filip Dewinter, takes a moment from a talk he was delivering in the beautiful Flemish parliament in Brussels (where the Tundra Tabloids had the privelege of visiting back in 2007), to address a woman seated in the gallery who was sporting a hijab, in violation of the Flemish parliament’s own rules on displaying political or religious symbols in the facility. KGS

The Baron fills in the details:

[Our Flemish correspondent VH has done a little background research on an incident that occurred in the Flemish parliament on Wednesday. Through his efforts we learn that the “woman with a headscarf” in the public gallery — who was supposedly made a victim by the Islamophobia of Vlaams Belang leader Filip Dewinter — is not what she seems.
Ms. Fatima Zibouh is not an innocent Muslima who just happened to be in the public gallery when she was picked on by Filip Dewinter. Her associations and connections, as demonstrated in the material below, lead not just to the extreme Left in Wallonia, but all the way back to radical Islam and the Muslim Brotherhood in Europe.
VH begins with a translation of this news account from Het Laatste Nieuws (and related linked articles) and a video of the triggering event. Many thanks to Vlad Tepes for his prompt subtitling:

Headscarf incident in Flemish parliament: “take it off or leave”

In the Flemish parliament on Wednesday February 10, Vlaams Belang leader Filip Dewinter lashed out about a woman with a headscarf in the public gallery of the parliament, who was in the audience for the plenary session. Dewinter demanded that the woman take off her headscarf out of respect for the parliament or leave the public gallery.
“When Muslimas are in the public gallery, they must at least take off their headscarves out of respect for parliament,” Dewinter said, noting the veiled woman. “Otherwise, they should leave the gallery,” he added. The Vlaams Belang leader pointed out that regulations state that neutrality [in visible political expressions] is required in parliament. The party colleagues of Filip Dewinter applauded this.
The Chairman of Parliament, Jan Peumans (N-VA) did not follow up on Filip Dewinter’s demand. “It disturbs me not at all that this lady is in the audience with a headscarf. And moreover, you are directing your remarks at someone who is in the audience and can not defend herself. I want to make that clear,” Peumans said. The Chairman of Parliament received extended applause for his intervention.

READ IT ALL HERE