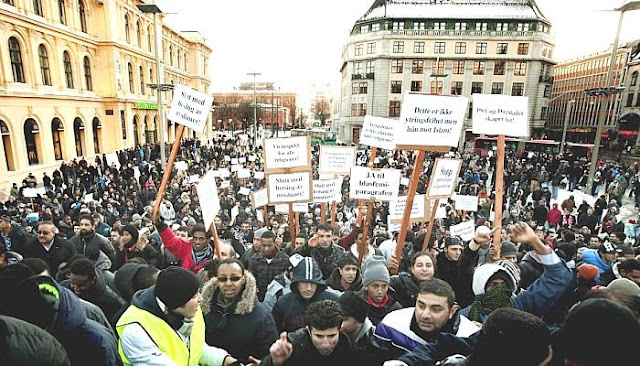 Captions read: “It’s not freedom to hate Islam”
Oh yes it is! Contrary to what these buffoonish followers worshippers of Mohamed, the false prophet of the cult of allah’s Islam, say, it is indeed the very fundamental right of freedom of speech to speak one’s mind about any religion, ideology and political system.

These morons speak the same lingo as the head moron-in-chief, OIC Secretary-General Ekmeleddin Ihsanoglu, who told the Tundra Tabloids in Helsinki in 08′, that, “no one has the right to insult his prophet”. The Tundra Tabloids responded with the following:
“Contrary to what the Secretary-General says, Freedom of speech does in fact mean the right to insult. Regardless of how tasteless it may be, it is a crucial, integral part of freedom of speech, one simply can’t survive without the other.”

It is also important to note that the during the demonstration, before the riot ensued, the Muslim demonstrators took to praying in the town square. For many of the uninformed, it’s just a religious moment of prayer, but for the Muslims, it’s a political show of force and part of their technique of conquering the public square. They should pray in their mosques or paryer houses, not in city streets. 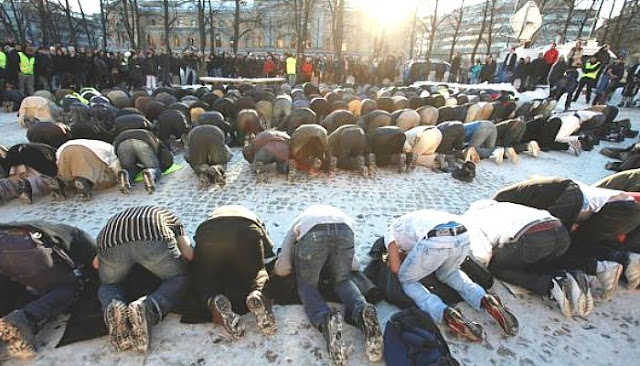 It’s wise to once again to remind you all that, once the Islamic community’s demographics reach critical mass, there will be demonstrations like this that are nothing more than open displays of intimidation of society and its political leaders. Finland has no such demos, due to its strict political correct environment, but also due to relatively low number of Muslims, which hovers anywhere between 30 000-40 000, depending upon who you ask.
The conquering of the public square by Muslims is something that the Jerusalem Center for Public Affairs’, Manfred Gerstenfeld and Tamas Berzi, addressed in a highly illuminating essay found at the JCPA’s website, about the Gaza war. Among other things that they said here was:

The Battle for the Public Square
Actions by various independent Muslim bodies amount to an effort to conquer the public square and at the same time remove Jewish and Israeli identities from it. This began, in part, at the beginning of this century when Muslims attacked individual Jews in various European countries. Initially France was a particularly severe case.[i] Later such attacks became a common phenomenon in some other countries as well.
The problem became so serious that some Jewish communities started to advise their members not to wear kippahs on the street. Former French chief rabbi Joseph Sitruk has made this admonition a number of times.[ii] On various occasions people wearing Stars of David were also advised to tuck them into their shirts.
Pessy Hollander, a Norwegian Jew, said he knows of many people in the Norwegian Jewish community who are afraid, as there have been death threats as well. An Orthodox family he knows no longer dares to go to the synagogue because they stand out in the street.[iii] As many visitors to major West European cities have noticed, at the same time many Muslims, through their mode of dress, increasingly emphasize their religion in the public domain.
During the Gaza war, the attempt to dominate the public square became more overt. Muslims attacked pro-Israeli demonstrations and Jews in the streets. There were arson attempts against Jewish institutions. After some anti-Israeli demonstrations, Muslim prayer services were held in public places­for instance, in Fort Lauderdale in the United States.[iv]
In Milan, a Muslim prayer session was held on the major square in front of the cathedral. This message can be interpreted in several ways. For instance: the Catholics pray inside, but the street, the public square, is for Muslim prayer. Or, the cathedral is empty, the street is full, and ultimately the cathedral will be a mosque. Many Italians understood the message; Interior Minister Roberto Maroni forbade future demonstrations in front of religious buildings. Later the Muslim organizers apologized to the cardinal of Milan.[v]
Sometimes the authorities assisted this process. The aforementioned removal of the Israeli flags in Duisburg by local police is one example. The dispersion of an authorized pro-Israeli demonstration in Malmö was another.
This battle for the public square is not only relevant to Jews but to the public at large. Those who currently want to impose themselves on the public square at the expense of the Jews are likely to do so in the future at the expense of others.

Folks, Islam is a political, militaristic, economic and social ideology, with religion being nothing more than the beard to the whole. The more one is made aware that Islam is not just another religion, the easier it is to understand the actions of its followers.

The Counter Jihad blog has an interesting post about the same demo and subsequent riot, as well as some interesting pictures of which the TT published a few here. KGS 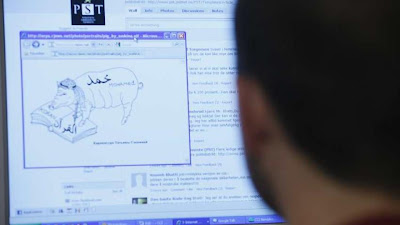