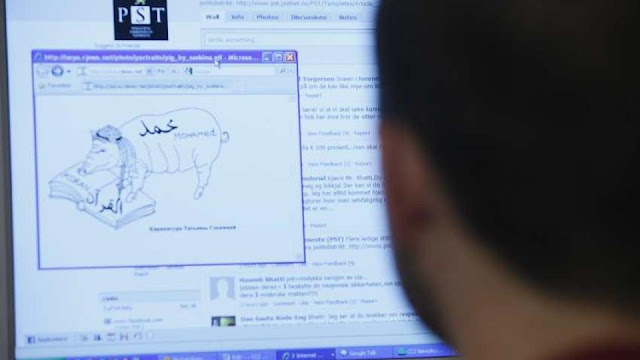 Oh, it’s not a threat, but just a warning
Yeah, riiiiight. Threats and intimidiation, that’s the way the devout who follow the real teaching of the prophet of allah’s Islam, handle their affairs. Yes the Islamic council in Norway warned their community to stay away from the demo, because they fear it will not be in the best interests of either Muslims or society at large.
But would they be saying that if Muslims constituted the majority or 1/3 of the population in Norway? The Tundra Tabloids thinks not. This is all pure strategy on their part, and not that they fundamentally disagree with the aims of the demonstration, shutting down free speech in Norway and intimidating the society. KGS

Warned against A Norwegian September 11

One of the leaders of the large demonstration in Oslo today warns that it can get a 11 September on Norwegian soil.
The clock started at15:00 with new demonstrations in University Square in Oslo against the publication of a caricature of the Prophet Muhammad. Around 16:00 there was heard a sharp bang at the Egon restaurant on Plata at Oslo, was probably fireworks that went off, “says NRK’s reporter on the scene.
Quiet demonstration
The demonstration appears to have gone quiet for him. It is unclear how many people participated in the celebration, but it is estimated that there were between 2,500 and 3,000 Muslim demonstrators out in the streets. […]
There is no threat but a warning
– If this will continue, then eventually it will be too late. Then we will get a 11 september or a 7. June on Norwegian soil. This is not a threat but a warning, said Mohyeldeen Mohammad, who is spokesman for the group “The volunteers” in his speech.
– There is no threat but a warning, “he says.
Several Muslim leaders and Islamic Council has warned young Muslims not to participate in the demonstration because they fear the demo will not be in the best interests of either Muslims or society at large.

H/T Vlad for the vid