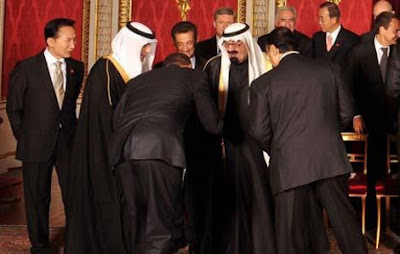 Hussein: I hope this satisfies your requirements
It’s totally disgusting that the United States is even paying homage to this racist and anti-democratic caliphate-in-waiting organization, the OIC. If it were up to the Tundra Tabloids, the US would pull out in a New York minute. KGS
NOTE: The more we give these potentates the time of day, them more they think they’re on the right course, with no need to change it.

DOHA (Reuters) – U.S. President Barack Obama said on Saturday he was naming a special envoy to a top Islamic body to further Washington’s cooperation with the Muslim world.
Obama told a U.S.-Islamic World Forum in the Qatari capital Doha in a recorded video message that he was naming White House official Rashad Hussain as special envoy to the 56-member Organization of the Islamic Conference.
“As an accomplished lawyer and a close and trusted member of my White House staff, Rashad has played a key role in developing the partnerships I called for in Cairo,” Obama said.
In a speech in Cairo last June, Obama called for a “new beginning” in ties between the United States and Muslims, many of whom felt targeted by the “war on terror” launched by President George W. Bush after the September 11, 2001 attacks, and by the wars in Afghanistan and Iraq.
“Since then, my administration has made a sustained effort to listen. We’ve held thousands of events and town halls …in the United States and around the world … And I look forward to continuing the dialogue during my visit to Indonesia next month,” Obama said.
Obama told Muslims in his June 4 speech in Cairo that violent extremists had exploited tensions between Muslims and the West and that Islam was not part of the problem.
His speech was welcomed by many Muslims, though some said they wanted him to spell out specific actions to resolve long-running problems like the Palestinian-Israeli conflict.
“And as a hafiz of the Koran, (Hussain) is a respected member of the American Muslim community, and I thank him for carrying forward this important work,” Obama said in his message to the Doha meeting, using the term for someone who has mastered and memorized the Muslim holy book.
Hussain was named deputy associate counsel to Obama in January 2009. He has served as a trial attorney at the U.S. Department of Justice and as assistant on the House Judiciary Committee, where he reviewed legislation such as the USA Patriot Act.
Hussain, who has a master’s degree in public administration and in Arabic and Islamic studies from Harvard University, graduated from Yale Law School, where he served as an editor of the Yale Law Journal.