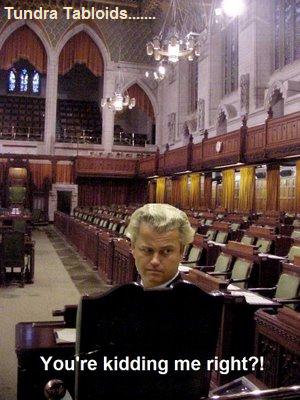 The Tundra Tabloids covered the Geert Wilders trip to the UK affair, rather extensively. From this time forward, the 12th of February will always be know by us in the Counterjihad as, Freedom of Movement Day. Kudos to Geert Wilders, as real champion of Western civilization. KGS

From the International Civil Liberties Alliance Calendar on February 12th:

Dutch MP Geert Wilders expelled from Britain because the British Government disapproved of his views about Islam, 12 February 2009

By WILLIAM MAYER and BEILA RABINOWITZ

February 12, 2009 – San Francisco, CA – PipeLineNews.org – As we noted on these pages just a few days ago [Threat By Islamist MP Gets Geert Wilders Banned From The UK] Britain’s Islamic radicals [including the Muslim Council of Britain and the British Muslim Forum] have applied significant political pressure over the last week or so on the Gordon Brown government in a now successful effort to muzzle Dutch MP Geert Wilders who was invited to discuss the Muslim jihad in Europe and to screen his short film Fitna which is critical of radical Islam.
Conspicuously driving that effort was Lord Nazir Ahmed, a Muslim member of the British House of Lords who threatened to mobilize “10,000 Muslims” if Dutch MP Geert Wilders was even allowed to enter the country.
This morning the controversy reached the point of boiling over with Mr. Wilders being taken into custody at Heathrow Airport where he was held in detention for hours before being expelled from the country.
Knowing what most likely awaited him, “on his flight to London, he told The Times that the British Government was ‘the biggest bunch of cowards in Europe.’ Wilders then added after his arrest, “I am in a detention centre at Heathrow. I am detained. They took my passport. I will not be allowed to enter the country. They will send me back within a few hours.” [source, http://www.timesonline.co.uk:80/tol/news/politics/article5718039.ece]
The response to Wilders simple entry into the country by the UK’s neutered ruling class stands in stark contrast to the way in which a Shari’a friendly Downing street has apparently surrendered to the active jihad being mounted in dozens of London mosques where the overthrow of civil government is routinely plotted.
Read more here.