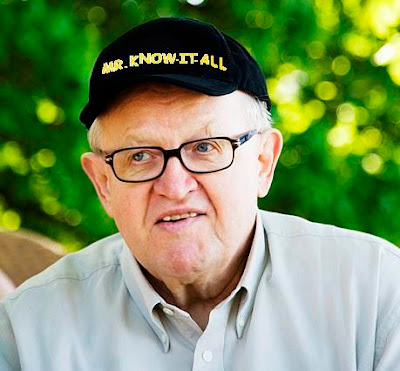 Mara: That makes sense, it fits with my hybris
The kind of people when retired from political office, you wish would stay retired, which means shutting their mouths and tend to their gardening. But like Jimmah Carter, Martti Ahtisaari, the former Finnish president and Nobel peace prize laureate, won’t call it quites, ever, no matter how much they soil themselves in public.
This is the guy who spent a large time of his life involved with the UN, and never spilled the beans on that disgusting organization, though it’s without a doubt that he knew of the stinking corruption that went on within its halls and insititutions. 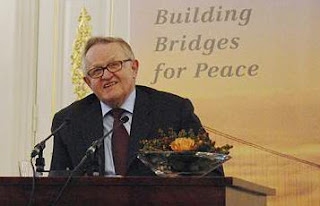 Now once again, Ahtisaari thinks he and his beloved (George Soros funded) Crisis Management Initiative can solve the Arabs’ conflict with Israel, in spite of the fact that the Arabs DON’T WANT AN END TO IT.

That inconvenient fact just never factors into the thinking of these ex-UN bureaucrat/politician lefty droids, no, why bother letting reality interfere with your chosen profession of international peace maker and high profile gatherings elbow rubber.

Buffoons like Ahtisaari are the reason why Israel’s sworn enemies feel encouraged, and will never give up the fight to control all the real estate currently called Israel, why should they when proven fools keep falling for their strategy time and again. The TT had some good words to say about the former Finnish president some years ago, but only in the context that the man isn’t an antisemite, who wouldn’t buy the nonsense the Arabs were peddling concerning the myth of massacre at Jenin. But the good words for Ahtisaari end there.
The man exhibits a hubris not unlike that of Barack Obama whom he champions, and believes has “the right stuff” to turn things around in the Middle east. Pure fantasy. Those of you who read the Tundra Tabloids on a regular basis know fully well that the Arabs’ conflict with Israel is not the linch pin to the solving of the region’s problems. It’s a well used disingenuous line used by people like Ahtisaari, who think they can move land and water by the sheer force of their will. He and others like him are pure fools. KGS
“president of influencing public opinion is just fine”
In the Interantiona arena, it is mainly one thing that creates uncertainty: the unresolved Palestine Question,

Palestine question makes it much harder with everything else in the Middle East, “he says.

-It is a good excuse for not resolving other conflicts. It leads to negativi attitudes against the West spread in Iraq, Afghanistan, Pakistan. It hampers normal relations with Iran.

Ahtisaari hopes, like many others, that Barack Obama may contribute to a turnaround. But Ahtisaari also believe that the EU might well play a far more active role. Despite what he calls “Europe’s own history of Israel.”

-Often, he says, needs to take a tougher approach to rescue the two parties.