Skip to content
Home
/
2010
/
February
/
10
/
Immigration
/
UK: LABOUR EXPOSED AS SEEKING MASS IMMIGRATION TO CHANGE THE STATUS QUO…….
Facebook
Twitter
Google+
LinkedIn
Pinterest
Comment: “This just confirms what the vast majority of British indigenous people have thought all along, as normal this government has lied, twisted and manipulated the figures from the minute of taking office without giving a second thought of what the effect of this social experiment would achieve on the general populous,these traitors need bringing to account immediately.” 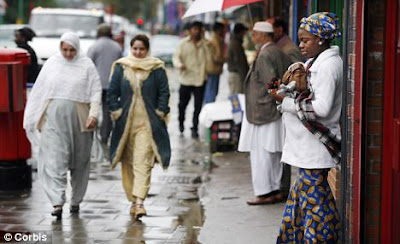 Folks, the gig is up on these fools, and they know it, we know it, and many the people who are slowly waking up to the reality of these stupid immigration policies know it. They have been trying to reengineer society to suite their own ideology and to ensure their continuence in power. The good people of the UK should stand outside their house of parliament with pitchforks and signs that read: “We’re mad as hell and we’re not going to take it anymore”.
This should be the year of the conservative, the year when sound, rational people take back their country from  the government drones who have inflicted upon them the worst form of governance known to human kind. Yes the worst form of governance. The reason why the Tundra Tabloids calls it the worst form of goverance, whether it’s in the UK, the US or here in Finland, is due to the fact an excellent system of governance was bestowed to these representatives of the people, and they squandered it, they turned their back on the people who elected them and on the rules that exist to guide them.
The Finnish and British governments chose subservience to Brussels over sovereignty of their individual states, and then lied to the people about it, insisting that they still live in a sovereign state. They aren’t, and that makes them liars of the highest order and traitors to their own states. In the US, many within both houses of Congress have turned their backs on the US Constitution, which started in great earnest with Franklin Roosevelt.
The US Republic and democracies of the UK and Finland deserve far better than what’s been handed to them, hopefully this is the year when the good people of the West rise up and say “no, we’re not going to take it anymore” and demand a corrected course in the direction their perspective countries are heading. KGS

Labour threw open the doors to mass migration in a deliberate policy to change the social make-up of the UK, secret papers suggest.
A draft report from the Cabinet Office shows that ministers wanted to ‘maximise the contribution’ of migrants to their ‘social objectives’.
The number of foreigners allowed in the UK increased by as much as 50 per cent in the wake of the report, written in 2000.
Labour has always justified immigration on economic grounds and denied it was using it to foster multiculturalism.
But suspicions of a secret agenda rose when Andrew Neather, a former government adviser and speech writer for Tony Blair, Jack Straw and David Blunkett, said the aim of Labour’s immigration strategy was to ‘rub the Right’s nose in diversity and render their arguments out of date’.
Mr Neather said he helped to write the 2000 report which outlined a strategy to ‘open up the UK to mass migration’.
The document was not published in its original format over fears of an adverse public reaction. Instead it was released a year later as a research document on the economic benefits of migration.
Mr Neather’s claims last October were denied by ministers, including Justice Secretary Jack Straw, who said they were nonsense.
A draft of the original Cabinet Office report has now been published following a freedom of information request by Migrationwatch.
It contains six references to social policy, all of which were removed from the later, published version.