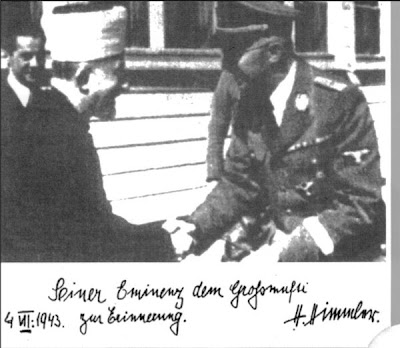 Vlad Tepes is following in the good steps of Pamela Geller by posting this eye opening interview of, Jeffrey Herf, professor of modern European history at the University of Maryland, College Park, concerning the “mind meld” between the Muslim Arabs and the German National Socialists during WWII.

Fusing both ideologies of Nazism and Islam together wasn’t a difficult task at all, as a matter of fact, when leafing through the Koran, one notices the ease with which any Muslim can rile up antisemtism or Judeophobia within another Muslim. KGS

Al-Masry Al-Youm: The West in general uses the term anti-Semitism, although both Arabs and Jews are Semitic. Are there other terms that are more apt.
Jeffrey Herf: The answer to this and other questions are in my book,
Nazi Propaganda for the Arab World. An entire chapter explores the extensive efforts made by the Nazi regime to avoid the use of the term “anti-Semitism.” It was, its officials stressed, a regime animated by antagonism toward the Jews but not towards Arabs and Muslims in general. The term anti-Semitism has long entered academic discourse to refer to hatred of Jews.
Al-Masry: Most Arab historians agree that the Nazis did not contribute great ideas that grew in the region, but you posit the opposite. What evidence supports your position?
Herf: The Nazi Arabic language radio broadcasts during World War II to the Middle East simultaneously attacked Zionism and the Jews. The absurd and false notion that an international Jewish conspiracy existed and was a major force in world politics was a key theme of Nazism’s wartime propaganda. Conspiratorial thinking focused on the supposed power of the Jews persisted after the war in the Middle East. The pejorative and hateful depictions of Jews in Nazi propaganda, the belief that they were inherently evil and that they should be punished as a result found echoes in the postwar publications of the Muslim Brotherhood, the writings of Sayyid Qutb, the postwar activities of Haj Amin al-Husseini, the Egyptian government’s propaganda under Nasser and in the Hamas Covenant of 1988.
Al-Masry: You claim in your book that the Nazis used Islamic heritage to increase hostility towards Jews. How was this done?
Herf: Nazi officials dealing with propaganda aimed at Arabs and Muslims concluded that a selective reading of the Quran and the commentaries about it was their most effective means of reaching this audience. In so doing they drew out the already existing anti-Jewish themes. They presented Islam — not radical, fundamentalist, political or jihadist Islam, but Islam in general –as a religion infused with and inseparable from hatred for the Jews.
In their view, from the time that the Jews rejected Prophet Mohammed’s demands that they convert to Islam, the Jews became an “enemy” of Islam. In so doing, Nazism’s Arabic-language propaganda placed the events of the mid-20th century into the far longer context of a supposed, but actually false, Jewish antagonism to Islam as a religion. They described Zionist aspirations as only the most recent chapter in a supposedly ancient Jewish effort to “destroy Islam.” In this effort they found quotations from the Quran and the commentaries on it that included pejorative and hateful comments about the Jews.

Al-Masry: You mention that the most important figure used by the Nazis in the region was Haj Amin al-Husseini, Grand Mufti of Jerusalem from 1921 to 1948. Al-Husseini struggled against the English occupation and Zionism in Palestine long before going to Germany, where his ideas were not radically changed. Is there new evidence to support your position?

Herf: Al-Husseini’s collaboration with the Nazi regime was never only an alliance of convenience based on the principle that “the enemy of my enemy is my friend.” In wartime Berlin there was a genuine meeting of hearts and minds between himself and other Arab and radical Islamist exiles with Hitler and officials in the German Foreign Ministry and the SS. On a number of occasions the Arabic language broadcasts which al-Husseini and the other pro-Nazi Arab and Islamist exiles helped to write and broadcast openly called on listeners to “kill the Jews.”

The new evidence in Nazi Propaganda for the Arab World includes more documentation of the Jew-hatred that al-Husseini brought with him to Berlin and of his skill at blending his bigotry with the conspiracy theories coming from the Nazi regime. This new evidence comes from the files of the American Embassy in wartime Cairo and the files of the German Foreign Ministry and SS in Germany. The Americans in wartime Cairo transcribed and translated the broadcasts by al-Husseini, Younis Bahri and others, and sent the texts back to the State Department in Washington. These documents in US government archives were important for my new book. This new evidence makes clear that one chapter in the longer history of radical Islamism was written in Berlin in World War II where there was not a clash of civilizations but a meeting of hearts and minds based on their worst elements.

Al-Masry: If we assume that Nazi propaganda against Jews had an impact in the Arab region, why did it not end with the fall of Nazism?

Herf: As I explained in my previous book, The Jewish Enemy: Nazi Propaganda during World War II and the Holocaust, the Nazi regime claimed that the Jews were responsible for starting World War II and that they controlled the governments of Britain, the US and the Soviet Union. In the minds of die-hard Nazis, the fact that the Allies won World War II meant that “the Jews” had won the war. The extermination of Europe’s Jews did not, in their minds, undermine this ideologically driven distortion. This idea was carried over to the Arab world by Nazi Germany’s Arabic language propaganda broadcasts, which asserted that a victory for the Allies, led by the US, Britain and the Soviet Union, would be a victory for the Jews. In the minds of Nazi sympathizers and their radical Islamist, Arab and Persian supporters, the foundation of the state of Israel in 1948 appeared to confirm that the predictions of Nazi propaganda had been accurate.