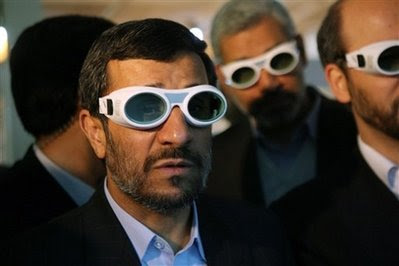 Moody: This is just like watching Avatar
So what’s the nobel winning US president going to do? They’re not stopping with uranium enrichment, the sanctions are not working, but all that dialogue keeps on flowing. So what’s to stop them other than a long intense bombing campaign that blows deep craters into the ground where nuke facilities now stand? KGS

TEHRAN (AFP) – Iran will begin enriching uranium to 20 percent from Tuesday, the Islamic republic’s atomic chief announced on Sunday just hours after being told to do so by hardline President Mahmoud Ahmadinejad.

The decision raises the stakes in a dispute with the West less than a week after Iran had appeared to accept a UN-drafted nuclear deal on the supply of fuel for a research nuclear reactor in Tehran.

Ahmadinejad’s move drew fire from Britain and the United States, and analysts said it was a bid to exert pressure on Washington and drive a wedge between the six powers over attempts to impose new sanctions on Tehran.

“We will inform the IAEA in a letter tomorrow (Monday) of our intention to enrich uranium to 20 percent,” Ali Akbar Salehi told the Arabic-language Al-Alam television, referring to the International Atomic Energy Agency.

“The higher enrichment will begin at the Natanz plant from the day after tomorrow (Tuesday),” he added. Natanz is in the central province of Isfahan.