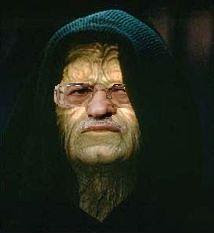 Darth Mazen (Mahmoud Abbas): [My (pulseless) heart bleeds for the calamities of Hiroshima and Nagasaki, the other Japanese city to suffer an atomic bombing. I just wish I could visit the same upon the Jews.]
This genocidal moron would like nothing better than to inflict another holocaust upon the Jews, wiping it completely off the map. It’s an insult to the great achievment of the United States of America in ending the war with Japan in 1945, by dropping the atomic bomb on those two cities that comprised a vast military complex, thereby saving hundreds of thousands, if not millions of  lives of both Japanese civilians and members of the US military.
Besides, inviting a monster who he himself is responsible for promoting incitement to murder as well as denying the Holocaust, to places like Hiroshima and Nagasaki, to offer his condolences, is a disgusting failure in judgement by the Japanese. It’s like the Germans inviting Mahmoud Ahmadinejad to Auschwitz to pay his sincere repsects for the memory of the Jews butchered there. The hypocricy of it all stinks. KGS
Palestinian Fakestinian leader arrives in Japan, visits A-bomb museum in Hiroshima
(al-AP) – HIROSHIMA, Feb. 7 (Kyodo)—Palestinian Authority (Fake) President Mahmoud Abbas arrived in Japan on Sunday for a four-day visit as part of his Asian tour and visited Hiroshima for the first time.

After offering flowers at the cenotaph for the victims of the 1945 U.S. atomic bombing of the city, Abbas went to the Hiroshima Peace Memorial Museum and wrote in a visitors’ book that his heart bleeds for the calamities of Hiroshima and Nagasaki, the other Japanese city to suffer an atomic bombing.
The Palestinian leader told reporters that the world should eliminate nuclear weapons and other weapons of mass destruction. He also said the Palestinians have been tormented by war and need support from other countries to achieve peace.

[TT: What Abbas really means: “The world should eliminate Israel’s nuclear weapons so it would be easier for the Muslims to destroy the Jewish state. We need more Western jizya money to keep our corrupt enterprise afloat until the day we finally wear out the Jews through our stubburn intransigence, and get rid of the Jews.”]

Abbas, who last visited Japan in May 2005, is scheduled to hold talks with Prime Minister Yukio Hatoyama on Monday and with Foreign Minister Katsuya Okada on Tuesday before heading for South Korea on Wednesday.
During the talks, the Japanese side is expected to formally notify the Palestinian leader of its intention to provide $20 million in aid and build a solar power plant in the West Bank town of Jericho.
Tokyo is also likely to commit to providing support for the resumption of the Middle East peace process between the Israelis and the Palestinians, which remains in a stalemate.

Why the bombing of Japan was necessary