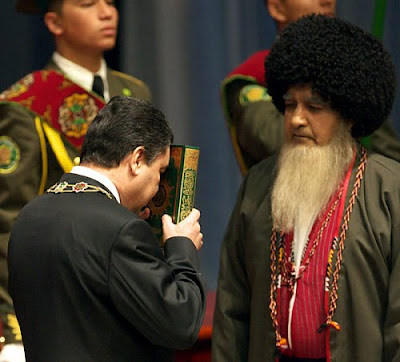 Turkmenistan Mo worshippers
No matter where the worshippers of Mo may be found, if they have enough political power, it’ll be used against the non-Muslim. In Islam, there is no equality with, nor any respect for, other beliefs and ideologies. KGS

Ashgabat (AsiaNews/F18) – The persecution of Protestants who come together and pray without the permission of the State continues in Turkmenistan. The agency Forum 18 denounces that now even local Islamic civic groups burst into Christian homes, confiscate Bibles and lead the faithful to the police station to “be heard”.
December 20 in the city of Dashoguz, Rovshen Allaberdiev chief mufti, imam of the region on led a police raid against the Path of Faith Baptist Christians gathered for Sunday prayer. The officers took photographs of those present and confiscated over 100 Bibles and other Christian books. All 22 faithful present were brought to the police station and interrogated for hours; some for fear signed an undertaking not to attend any more Christian meetings.
The authorities say it is forbidden to meet without the group being registered by the state, but some believers report that they applied for registration long ago but have received no answer, and ask only that they can meet and pray. January 28 in Gurbansoltan-eje, still in the area Dashoguz, police interrupted a birthday party in a private home, identified and questioned all those present and took the pastor Yuri Rozmetov and his mother, detaining them for hours.
F18 denounces that such actions are frequent: in the town of Mary, the secret police often summons the faithful of the Pentecostal church peace to the world interrogating them for hours, who have also applied for registration without obtaining it. They are often forced to sign statements recanting of Christianity.
In late January Pentecostal Pastor Ilmurad Nurliev from Mary was prevented from leaving the country. He was forced to disembark from the plane, because since 2007 he has been banned from going abroad, without any explanation.
H/T: Baron Bodissey