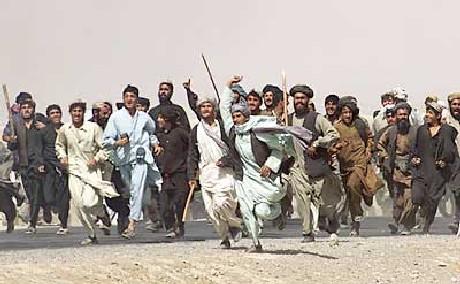 Weasel Zippers: They’re coming for you Karzai and they won’t stop until your hanging from a sign-post like Najibullah…

KABUL, Feb 5 (Reuters) – The Taliban have said they will not enter into any “deal” with the Afghan government or the West to bring peace to Afghanistan, and their fighters will continue to die to achieve a victory they say is around the corner.
At a conference in London last month, Afghan President Hamid Karzai invited the Taliban to a peace council and set out plans to lure fighters down from the hills in return for cash and jobs.
But in a statement posted on the Islamists’ website (alemarah.info/english) on Thursday, the Taliban vowed to “collude” with no one.
The statement made no specific reference to Karzai’s proposed talks. The Taliban had initially told Reuters they would decide “soon” on whether to take part in talks. [ID:SGE60SO8N]
The Islamists have repeatedly rejected previous offers of talks before all foreign troops are withdrawn.
“During the past eight years, the Islamic Emirate has not shown any willingness to reach collusion with any party as regards the Jihad, the country and the people, national and Islamic interest,” the Taliban said.
“Now, it is not ready to have any illegitimate, valueless deal about the victory, which is near at hand.”