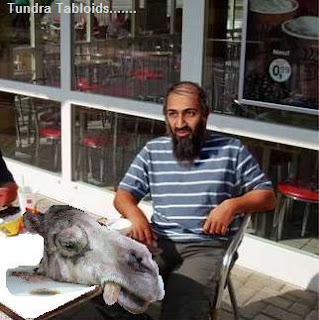 Osama Bin-Laden:
When I get a hankering for camel burgers, I head for Dubai
The Tundra Tabloids wonders whether camel urine is a part of the menu as well? KGS
Sahih Bukhari Volume 8, Book 82, Number 794:
“ Narrated Anas: Some people from the tribe of ‘Ukl came to the Prophet and embraced Islam. The climate of Medina did not suit them, so the Prophet ordered them to go to the (herd of milch) camels of charity and to drink, their milk and urine (as a medicine). They did so, and after they had recovered from their ailment (became healthy) they turned renegades (reverted from Islam) and killed the shepherd of the camels and took the camels away. The Prophet sent (some people) in their pursuit and so they were (caught and) brought, and the Prophets ordered that their hands and legs should be cut off and that their eyes should be branded with heated pieces of iron, and that their cut hands and legs should not be cauterized, till they die..
DUBAI: RESTAURANT LAUNCHES CAMEL BURGER
(ANSAmed) – DUBAI, FEBRUARY 4 – Camel burgers served in a kamir bun, a tribute to the fusion between Bedouin traditions and globalisation, have been launched by a restaurant chain in Dubai. The Local House chain owns a bar in Bastakya, in the heart of the old city, another in The Walk, the sparkling seafront in the shadow of the ultra-modern steel and glass skyscrapers, and a third is being planned at the foot of Burj Khalifa.
The company confirms that the new dish is already a success among fussy Emiratis and curious tourists. The burger, 120 grams of meat with no fat and no cholesterol, is served with salad or fries and costs 20 dirham (about 5 euros), slightly more expensive than the classic American hamburger, which has seen sales fall by around two-thirds in the last year.
The meat of the desert quadruped, expensive and delicious, is usually only served on important occasions, such as wedding banquets. Camel milk however, is widely used: from beauty treatments, popular among the women of the region, to camels milk chocolate, on sale since 2008. Another popular item at the Local House is camels milkshake.