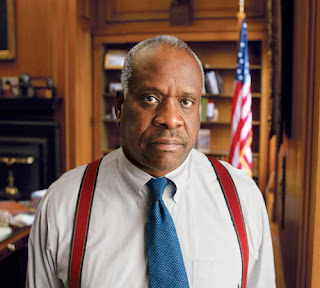 SCJ Clarence Thomas:
Mr.President, you lied
The lies spread by the Obama administration, all the while it “holds out its hand” for bi-partisan team work in solving the problems facing the US, like the high cost in health care, the battered economy and fighting the war “that dare not be accurately named”, have been as long as they have been consistent. The latest lie told by the nation’s president on live TV while addressing the state of the union, was one of the more “over the top” sort of lies that will most likely go down in history as one of the better well known.
Here is Supreme Court Justice, Clarence Thomas, setting the record straight, and by doing so, inadvertently reveals the depth of support by traditional Republicanism for the African American community. Not many remember just how closely tied the party of Abraham Lincoln was to black issues, and if not for the socialist policies promoted by successive Roosevelt administrations, the African American community would be better off today.
Federal welfare state policies for black America has had a devestating effect on that community. The danger now facing America is that Obama wants to enlargen that “nanny state to include not only blacks but everyone else as well. His socialism has to be exposed and rejected by every red blooded American. KGS
Supreme Court Justice, Clarence Thomas:

“NYT: ….the history of Congressional regulation of corporate involvement in politics had a dark side, pointing to the Tillman Act, which banned corporate contributions to federal candidates in 1907.
“Go back and read why Tillman introduced that legislation,” Justice Thomas said, referring to Senator Benjamin Tillman. “Tillman was from South Carolina, and as I hear the story he was concerned that the corporations, Republican corporations, were favorable toward blacks and he felt that there was a need to regulate them.”
It is thus a mistake, the justice said, to applaud the regulation of corporate speech as “some sort of beatific action.”

NOTE: Visting former president of Poland, Lech Walesa, stumping for ethnic Polish Republican gubernatorial candidate for the state of Illinois, Adam Andrzejewski, stated the very warnings about the dangers of the US enflating its bureaucracy, which is a direct indicator of a drifting towards socialism.
QUESTION: TO SOMEONE WHO HAS WITNESSED COMMUNISM UP CLOSE, IS THERE A JUSTIFIABLE WORRY THAT AMERICA BEGINNING TO MOVE MORE TOWARDS SOCIALISM?
Yes, it is a little bit like the issue with those banks, so this indicates it is a little bit in that direction. There were some big challenges that the state taking care of people, well like the discussion for a Poland campaign they’re good, but when the government starts doing it, it basically puts a lot of money and it’s wasted, and it’s a concern.
The private entrepreneurs, they are more fragile, and more wiser when managing the money and the economy. The government will waste all the money, they just build a bureaucracy just for itself to support itself. So we have to be very careful in following (unclear), we have to take care of people, health care, but you have to pay attention to bureaucracy, look for the financial waste.
It’s better when individuals take care of things him or herself, and when he has the money to do it, he spends his money right. And we see that like in America, but we will not let you build communism here.