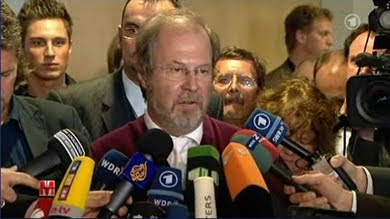 State prosecutor Volker Brinkmann: ‘The accused have damaged Islam. They have given new nourishment to the reservations held against the world’s second largest religion,’ the prosecutor continued, adding that few people shared their fundamentalist Wahabi views.”
Where does he get that from? How does one come to that simple minded conclusion that “few share Whabbi views”, did he interview the world’s Muslims and get detailed responses from them all? What he’s doing is assuming, or worse yet, hoping against all hope that most Muslims do not hold Islamic traditionalist/racist/supremacist views. KGS
The Sheik says it best:

Aren’t you sick and tired of these mental gorilla’s who are too intellectually lazy to educate themselves about the RoP? What does it take, apart from a few hours here and there to read the Koran, the hadith, or to read a bit on the Islam section of this blog? But no, even 9 years after 9/11 we have to bear the ignorance of our bureaucrats and officials, who just won’t learn. A sad state of affairs. An intolerable state of affairs….
German prosecutor: ‘The accused have damaged Islam. They have given new nourishment to the reservations held against the world’s second largest religion…’ How so, mister prosecutor? The prosecutor, like many non-Muslim officials before him, took it upon himself to defend something he clearly knows nothing about — Islam.

Dusseldorf – The chief prosecutor in the German trial of four alleged Islamists said on Wednesday that they had planned ‘mass murder’ on a scale unknown in Germany.

State prosecutor Volker Brinkmann said the members of the so- called Sauerland Group were driven by an overwhelming hatred of US soldiers and by a desire to carry out mass murder, and would not have shied away from killing innocent women and children.
The group, consisting of Daniel Schneider, Fritz Gelowicz, Adem Yilmaz and Attila Selek, is accused of planning attacks on US military bases in 2007. The chief prosecutor emphatically warned against the ‘cancer of Islamist terrorism,’ as he set out his case to the Dusseldorf court. He argued that this ‘cancer’ would stop at nothing and chose its victims at random. Brinkmann said the four defendants had shown no real remorse during the nine-month trial, and said they did not confess out of regret.
‘The accused wanted to buy themselves a reduced sentence by pleading to the charges. Even the most convinced holy warrior does not want to sit in prison and watch the jihad (holy war) pass by,’ the prosecutor said.
Read more: