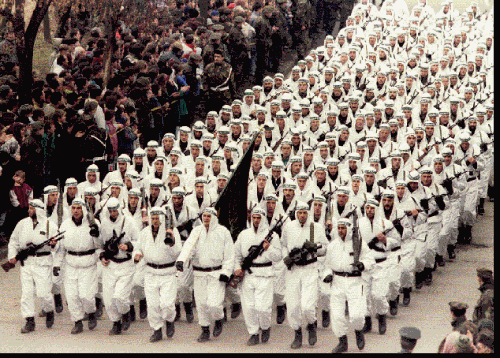 And in the West, Izetbegovic is deemed a hero and freedom fighter: BBC: “Crowds prayed and chanted Allah Akhbar (God is great) as his (Izetbegovic) coffin was driven through the streets.” These Al-Qaida jihadis pictured marching in the streets of Bosnia no doubt, would agree.

Forget the nonsense about Bosnia being this oasis of “moderate Islam” that shows the way for the rest of the Islamic world to follow. They’re moderation ´should be judged not by the Islam that they follow, but by how much non-Islamic culture has influenced their thinking, instead of traditional Islam. The more these Muslims get into contact with their inner Mohamed, the less European they’ll behave.  KGS

Sarajevo, 2 Feb. (AKI) – Bosnian anti-terror police on Tuesday raided the northeastern Bosnian village of Gornja Maoca, a stronghold of conservative Muslims. Women were reportedly among some ten Wahabis detained by police for questioning.
The villagers are suspected of “jeopardising Bosnia’s constitutional order and spreading national, racial and religious hatred,” the Bosnian prosecutor’s office said in a statement.
Wahabi Muslims are followers of an austere (TT: traditional) form of Sunni Islam that originated in Saudi Arabia during the sixteenth century (TT: when mohamed created Islam).
The operation was carried out by 600 police officers and was the largest since the end of the country’s 1992-95 war, according to Bosnia’s state prosecutors.
Police also said they uncovered a large quantity of weapons from a number of buildings searched during the raids.
Bosnia’s largest Wahabi community lives in Gornja Maoca, near the northeastern town of Brcko. The village is reported to be run according to Sharia law and its inhabitants reported to have connections to Islamist terrorist networks.
Police searched another location, in the Gornji Rahic area, also close to Brcko, seizing computers, cell phones and other equipment from the home of a Wahabi there, Serbian media reported.
Many followers of the Wahabi movement in Bosnia are Arabs who fought on the side of local Muslims during the war.
Many have remained in the country after the war, indoctrinating local youths and even operating terrorist training camps, western intelligence sources have said.
Most Wahabi homes fly black Islamic flags, and the children do not attend public schools – a violation of the Bosnian laws. Local road signs are reported to be in Arabic.