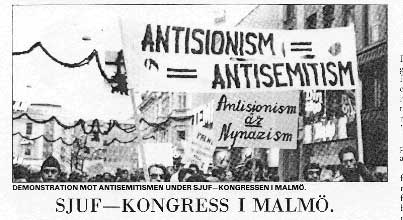 Here’s another nail in the coffin of the mythical term “Islamophobia” and the meme that Muslims are feeling the brunt of discrimination in Europe. Wrong, it’s rising Muslim and Leftist antisemitism that’s causing an exodus of Jews from areas they have lived for generations. Once again, it’s the Jews who are feeling the pinch from intolerance, not Muslims, who are still arriving to Sweden by plane, ship or train from lands which have a traditional, deep seated hatred for Jews. This is what Sweden, and many other Euopean states within the EU have chosen for themselves in place of the Jew, antisemites. KGS

IsraelNN.com Violent anti-Semitism has become increasingly commonplace in Sweden’s southern city of Malmö, leading many Jewish residents to leave out of fear for their safety. “Threats against Jews have increased steadily in Malmö in recent years and many young Jewish families are choosing to leave the city,” said Fredrik Sieradzki of the Jewish Community of Malmö.
Last year, 79 crimes against Jewish residents were reported to the Malmö police, roughly double the number reported in 2008. In addition, Jewish cemeteries and synagogues have been repeatedly defaced with anti-Semitic graffiti, and a chapel at another Jewish burial site in Malmö was firebombed last January during Operation Cast Lead in Gaza. Many Jewish residents of Malmö feel that local anti-Jewish sentiment is linked with negative attitudes towards Israel.
In addition to its small community of roughly 700 Jews, Malmö is home to a growing Muslim population. However, local Jews insist that the majority of anti-Jewish sentiment, although certainly existent in the Muslim community, is coming from local Swedes.
Sieradzki says that the attitudes of Malmö politicians, especially Social Democrat city council chair Ilmar Reepalu, have allowed anti-Semitism to fester. “He’s demonstrated extreme ignorance when it comes to our problems,” Sieradzki explained. “It’s shameful and regrettable that such a powerful politician could be so ignorant about the threats we face.
“If you read between the lines, he seems to be suggesting that the violence directed toward us is our own fault simply because we didn’t speak out against Israel. We’re a non-political, cultural and religious organization, and there are all kinds of Jews in Malmö.”
Sieradzki admitted his pessimism about the future of the Jewish community in Malmö, saying that there needs to be a “complete change in attitude” among the city’s politicians if the situation is going to improve. “These issues need to be taken seriously,” he said, advocating for dialogue between politicians, Islamic groups and the Jewish community. “But right now many Jews in Malmö are really concerned about the situation here and don’t believe they have a future here.”