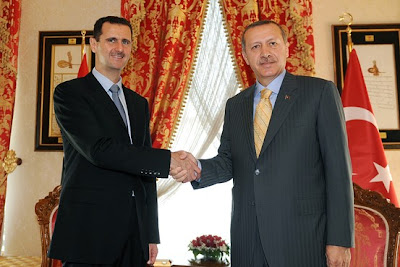 A handshake between antisemites
doesn’t spell anything good for Jews
But wait, isn’t the ever increasing Islamized Turkey becoming more antisemitic towards Israel and Jews? (For proof of the rise in Turkish antisemitism, click here, here and here). (Syria as well) How will that work?

In short, it won’t. Syria needs tension on the border with Israel in order to stay a viable dictatorship, besides, nothing works better on the international stage than to offer false intentions for peace, then hold back due to Israel’s insistance on not committing national suicide.

Syria fosters antisemitism against Israel as do the Turks, with such a dream team of antisemites combining forces, it’s not difficult to conclude that, the chances of their “peace initiative” being genuine aspirations for peace, and succeeding, are none to nill. KGS

Reuters quotes Turkish FM as saying that “If the two countries agree to restart it, we can do it”; Assad: Israel must “declare frankly” it wants peace.
Turkey is ready to try again to broker a peace agreement between and if both countries agree to resume the stalled initiative, Turkish Foreign Minister Ahmet Davutoglu was quoted by Reuters as saying Friday.
Davutoglu said ‘s 2008 operation in scuttled a potential peace deal after mediated in indirect talks between and .
“Is it possible to restart it again? Yes, why not?” Davutoglu said in response to a question about the talks.
“If the two countries agree to restart it, we can do it. As , we are ready,” Davutoglu said at the International Institute of Strategic Studies think tank in .
“The Syrian side already declared they want to continue from where we left [off]. The Israeli side, they have different views. Some coalition members are against, some are in favor. We will see,” he said.
“If we see a strong political will, both in and , we will continue to support [peace efforts]. We will support every attempt, step in the direction of peace.”