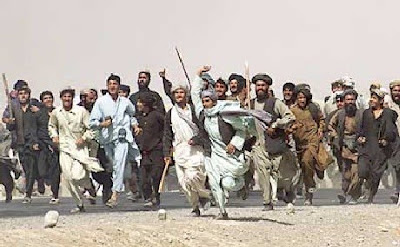 We’re next!
Lets be frank here, these “officials” are corrupt war lords who profit from the heroin drug trade. They are also Taliban-style Islam enthuisiasts who have nothing but admiration for Osama Bin-Laden, and no doubt help fund the international jihad against the West whenever possible. The decision to engage the “moderate Taliban” is nothing more than a ruse to placate the status quo from finishing off the corrupt Karzai government. Good luck with that one. KGS

KABUL (AP) – Five former Taliban officials have been removed from the U.N. sanctions list ahead of Thursday’s key international conference in London that is expected to focus on a government plan to persuade militants to switch sides.
President Hamid Karzai has been pressing for the removal of certain Taliban figures from the list, which imposes punitive measures such as a travel ban and an assets freeze, as part of reconciliation efforts.
The United Nations said Tuesday that the sanctions committee approved the removal of Wakil Ahmad Muttawakil, a former foreign minister and confidant of Taliban leader Mullah Mohammed Omar and four others.
The U.N. did not mention the reconciliation plan but said the decision was made Monday after a review of the list. Sanctions had been imposed on the five men in 2001.
Karzai has said Taliban who are not part of al-Qaida or other terrorist groups “are welcome to come back to their country, lay down arms and resume life.”