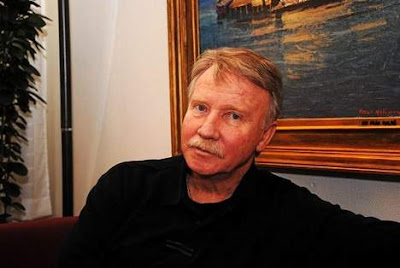 Ilmar Reepalu:
Arab self determination is fine,
it’s Jewish self determination that I object to.
Another antisemitic Swedish/Scandinavian politician denies the Jews their obvious right to determine their own lives. In an interview, ironically about stamping out antisemtism in Malmö, Sweden,  Mayor of Malmö, Ilmar Reepalu, blames the collective Jew, Israel, for recent attacks against Jews in Malmö, “due to the conflict in Gaza last year spilled over to Malmo.”
But Reepalu goes further to elucidate his true views on Israel, which basically follows the thinking in the Islamic world, that Jews are not allowed a national movement of their own. For him, Zionism equals racism. But he wouldn’t ever dream labeling the Palestinian movement as racist, for not wanting a single Jew to remain on “Arab land”, as well as the Arab/Muslim states that support their position. From the interview:

Skånsen.se: “Have You considered to say in public, that Malmö does not accept antisemitism. Or is it controversial?

Ilmar Reepalu: We don´t accept Zionism or antisemitism. They are extremists, which want to set themselves over other groups and believe they are worth less.”

*NOTE: A sloppy google trans of the Swedish interview in English is available here.

And we all thought such sentiment in Europe at least, ended with the infamous, Zionism = racism resolution being revoked in 1991. Think again, the antisemites are out in full force, this time around, they take up the banner of not being antisemitic all the while they expose themselves as being just that.

Just last year the TT went head to head with Finnish world record holder, pianist, Richard Järnefelt, who believed that his prior good deeds in helping Jews exonerated him from ever being considered an antisemite concerning his views about Israel.
These ignoramus types can’t figure out the gross contradiction in saying that they’re truly “philosemitic”, all the while they equate the Jewish state with the Nazis, and reject Jewish self determination. KGS
NOTE: Malmö was the scene for last year’s antisemitic/anti-Israel demonstration by Israel/Jew haters, who insisted that a Jewish/Israeli tennis player be exluded from the Davis Cup tournament.

NOTE: Malmö Sweden has the highest cencentration of Muslim immigrant/refugees in Sweden, and was a former strong hold of support for the Nazis during WWII. This is a clear example of the danger Leftist politicians pose to democracy, when they import mass volumes of people who hold antisemtic views, then court them for their vote.