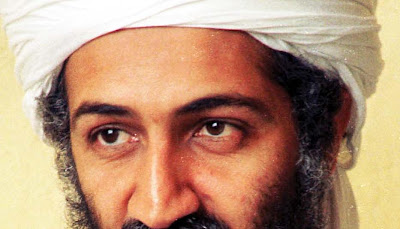 Yes ladies and gentlemen, despite the US president’s denial that the war on Islam-O-fascism doesn’t exist, the war is still on. KGS

WASHINGTON (AFP) – Osama bin Laden’s word choice in the latest audio message attributed to him is seen as a “possible indicator” of an upcoming attack by his Al-Qaeda network, a US monitoring group warned Sunday.

IntelCenter, a US group that monitors Islamist websites, also said that manner of the release and the content of the message showed it was “credible” that it was a new release from the Saudi extremist.

“The Osama bin Laden audio message released to Al-Jazeera on 24 January 2010 contains specific language used by bin Laden in his statements in advance of attacks,” IntelCenter said in a statement.

The group said it considered the language “a possible indicator of an upcoming attack” in the next 12 months.

“This phrase, ‘Peace be upon those who follow guidance,’ appears at the beginning and end of messages released in advance of attacks that are designed to provide warning to Al-Qaeda’s enemies that they need to change their ways or they will be attacked,” the group said.

In a statement carried by Al-Jazeera television, bin Laden praised the Nigerian man who allegedly tried to blow up a US airliner approaching Detroit on Christmas Day.

He warned the United States that, “God willing, our attacks against you will continue as long as you maintain your support to Israel.”

IntelCenter said the audio statement “appears to be exactly what it purports to be, an audio message from bin Laden.”

“The manner of release, content of message and other factors indicate it is a credible and new release from bin Laden,” it said.

The center said similar language attributed to bin Laden was made in a March 19 2008 condemnation of cartoons depicting the Prophet Mohammed which was followed by an attack on the Danish Embassy in Islamabad on June 2, 2008.

The phrase also was used in bin Laden’s April 15, 2004 European truce offer, which was followed by Al-Qaeda attacks in London in July 2005, according to the IntelCenter, which said the 14-month lapse could be explained by the “difficulty” in actually putting an attack into operation.