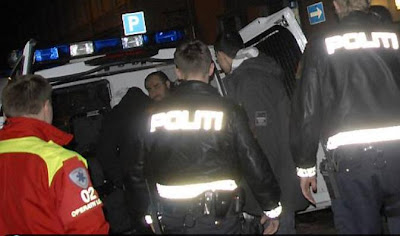 The terrorist escaped without a scratch!

The details are still sketchy, but someone had ordered a mob-style hit on Mullah ‘the terrorist’ Krekar last night in Oslo Norway, wounding one of his relatives. The following is a Google translation of the Norwegian article forwarded to the TT from Vlad Tepes. KGS

TØYEN (AP) A man in the family of Mullah Krekar was injured during an attack launched against the former guerrilla leader’s house in Tøyen Oslo, Monday night.
The police said that shots were fired from the outside into the apartment on the 5th floor. According to the police to the perpetrator or perpetrators had stood just outside the window in the apartment. Apartment block has some sort of outside time, where the doors are. This is where it should have been shot.
[…]
– In-law to Krekar has been hit, but it is not the case of a serious injury, says efforts manager Kjell Kverme the police to VG Nett.
The police, who sealed off the area around the residential block, says further that it was several shots fired . Mullah Krekar and his family shortly after the shooting were evacuated from the apartment. Krekar himself was driven away in a police car.
The man who is shot is sent to the doctor for examination. Ifølge politiet skal det ha vært fem personer inne i leiligheten da det ble skutt. According to the police should have been five people inside the apartment when it was shot.
The police got the message about the shooting at 01.54, and were the first who came to the scene.
– Our patrol had to perform first aid for fire victims, said Kverme.
Two men were seen running from the scene in Heimdalsgata after the shooting, and more police patrols looking for the perpetrators in the area.
On the night of Monday run from the police crime scene technicians and finkjemmer back yard in the block where Krekar lives.