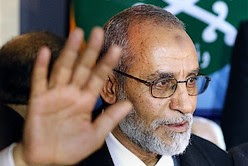 M.Badee: Thank you my brothers,
the dark spot on my forehead was not in vain

The TT wonders if  CAIR, the Council on American and Islamic Relations has sent their congrats to the new leader, seeing that they’re the American branch of the same outfit and all? KGS
H/T: TINSC

Arab World: Meet the new head of the Muslim Brotherhood

Last Saturday in Cairo, the Muslim Brotherhood announced that it had elected Muhammad Badee as its new supreme leader, a succession which comes at a critical time. A few months ago, Muhammad Mahdi Akef – who had ruled the organization for the past six years – stated that he would not seek another mandate, thus sparking a crisis of major proportions.

But the trouble had already been brewing for a while.

Akef has continually fomented outrage in Egypt with extremist pronouncements. Not only does he overtly support Hamas and Iran, a year ago he proclaimed that he would rather see a Malaysian Muslim as president of Egypt than an Egyptian Copt.

Furthermore, an increasingly large number of Brothers are clamoring for reforms within the group. When the old leader came to the conclusion that he could not bridge the gap between the hard-liners and the reformers, he decided it was finally time to step down.

The younger generation of members are yearning to shake the yoke of the old guard and democratize the movement, and have thus become increasingly restive. They had pinned their hopes on Akef’s second in command, Muhammad Elsayed Habib, but he resigned in protest at the Akef’s policies and subsequently lost his seat on the Guidance Council (the governing body) in December.