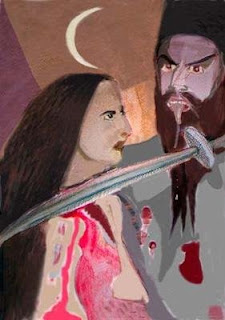 How much more of this can one bear? KGS

Court hears that Afghan man strangled his wife after complaining she was ‘becoming Australian’
AN Afghan man strangled his wife with her veil after complaining she was “becoming Australian”, a jury has heard.
Mother of five Marzieh Rahimi, who was said to be trying to escape a violent arranged marriage, was killed in front of her baby and toddler.
Soltan Ahmad Azizi, 45, has pleaded not guilty to her murder at their Hampton Park home in November 2007.
The Supreme Court heard yesterday that Ms Rahimi, 33, had told social workers her husband had branded her a slave with no rights.
Prosecutor Peter Rose, SC, told the jury Ms Rahimi had complained her husband punched her and said her only purpose was to have babies and raise children.
Ms Rahimi, who spoke little English and communicated through an interpreter, had told a family violence officer and a health worker that she wanted to leave the marriage, but that she felt powerless, unsupported and fearful.
In his opening address, Mr Rose told jurors that when Mr Azizi learned she’d talked to outsiders he told her she was shaming him and must stop.
“I’ll kill you because I can’t carry the shame,” he allegedly said when she spoke of separation or divorce.
The jury heard that about a week before his wife’s death, Mr Azizi complained to his sister-in-law that she was “becoming Australian and had changed her religion”.
The cousins wed in an arranged marriage and came to Australia as refugees in 2005. Their eldest children were aged 11, nine and six.
Mr Azizi told police he didn’t plan to kill Ms Rahimi. He said he punched her, then “choked her with her veil”; he then rang 000, telling the operator, “I killed my wife … come see. You come. My kids are only little.”
Police found Ms Rahimi on the floor with her baby, three months, and toddler, 22 months, nearby.