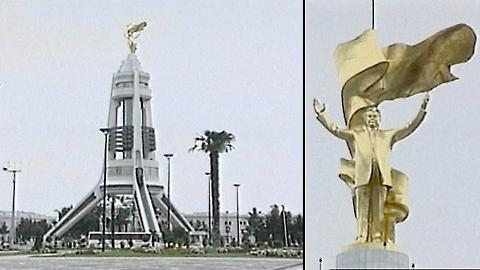 The Tundra Tabloids met a Finnish university wonk some years ago who actually visited Turkmenistan, who stated that it was quite a surreal sight to see the golden statue of “The  Father of All Turkmen”, Saparmurat Niyazov, with his face always turning towards the direction of the sun. KGS

ASHGABAT, TURKMENISTAN — Turkmenistan will take down a tower topped by a golden statue of the Central Asian nation’s former dictator — the latest attempt to dismantle the late leader’s personality cult.
President Gurbanguli Berdymukhamedov ordered the work to begin in March, according to a decree Monday in the state newspaper Neutral Turkmenistan.
The Arch of Neutrality — a 230-foot (70-meter) white tile-clad tripod crowned by a statue that rotates to face the sun — was the most distinctive monument built in honor of Saparmurat Niyazov.
State media said the president made the decision to dismantle the tower to improve the urban design of the former Soviet nation’s capital city, Ashgabat. However, the move seems to fit in with a general policy of gradually toning down references to Niyazov and his legacy.
Niyazov — who renamed himself the Great Turkmenbashi, the “Father of All Turkmen” — died unexpectedly in late 2006 after two decades of iron-fisted and often eccentric rule that made Turkmenistan one of the world’s most isolated and repressive societies.
Niyazov renamed cities, streets, months, periodicals and public organizations after himself and family members and made a two-volume spiritual tome he wrote mandatory reading.
Since Niyazov’s death, most of his formerly ubiquitous portraits have been removed from the outsides of public buildings. Berdymukhamedov has also ordered Niyazov’s name to be excised from the patriotic oath published in newspapers daily and repeated at the end of all TV news programs.
Read more at the Washington Examiner:

UPDATE: Reinhard forwards a link which contains a poem by the Late Dear Leader of Turkmenistan:

TURKMENISTAN,
MY BELOVED MOTHERLAND,
MY BELOVED HOMELAND!
YOU ARE ALWAYS WITH ME
IN MY THOUGHTS AND IN MY HEART.
FOR THE SLIGHTEST EVIL AGAINST YOU
LET MY HAND BE LOST.
FOR THE SLIGHTEST SLANDER ABOUT YOU
LET MY TONGUE BE LOST.
AT THE MOMENT OF MY BETRAYAL
TO MY MOTHERLAND,
TO HER SACRED BANNER,
TO SAPARMURAT TURKMENBASHI THE GREAT
LET MY BREATH STOP

“By the order of Allah the Most Exalted, as the shadow of the third millennium fell on to us, in 1991, Türkmenistan became an independent state. However, at the outset, this was only on paper. The developing society, state institutions, thinking on national independence, sustainable economy and international affairs shaped by national interest were namely taking shape. The most challenging aspect of this business is to connect individual fate with independence and to understand a roasted or fried meat dish.”