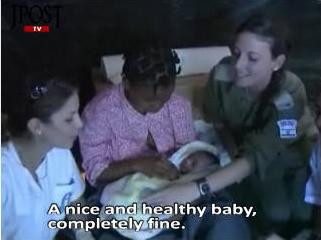 It warms the heart. KGS

Tel Aviv/Port-au-Prince – A Haitian woman whose baby was the first to be born in an Israeli field hospital set up in the capital has decided to name her son after her rescuers.
Baby Israel was in good health and being cared for by the doctors and nurses at the mobile hospital, a military spokesman in Tel Aviv confirmed Monday.
The woman, in her mid-20s and eighth month of pregnancy, arrived at the facility at around 3 am Sunday, a day after it opened. She gave birth naturally.
A relative suggested the baby boy be named Israel, according to the spokesman.
The woman’s husband is said to be missing and her three other children being cared for by her parents.
The 220-member delegation of the Israel Defence Forces (IDF) Medical Corps, which includes 40 doctors and 25 nurses, arrived in Haiti on Saturday.
The hospital, with a capacity to treat up to 500 patients a day, was set up on a football field in Port-au-Prince within eight hours on the same day. It consists of a radiology department, an intensive care unit, an emergency room, two operating rooms and a pharmacy.
So far, it has treated more than 270, most of whom suffered from limb injuries and bone fractures, according to the IDF.
The Israeli team on Saturday freed a Haitian government worker who had been trapped for over 90 hours in the destroyed customs office in Port-au-Prince.
Israeli rescuers also helped to recover eight students from the collapsed, eight-storey university building in the city.
The rescuers included a six-member team of the Zaka International Rescue Unit, an Israeli non-governmental organization of Jewish religious volunteers experienced in collecting body parts after suicide bombings.
The team’s head, Mati Goldstein, in an email to Zaka’s Jerusalem headquarters, described the situation on the ground as ‘hell.’
Read more: