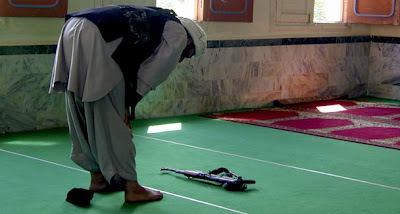 The Reigion of Peace

I guess these Muslim jihadis forgot that there’s no compulsion in Islam to convert. What a crock. KGS

Still in intensive care, they were shot for refusing order to convert to Islam.
TOBA TEK SINGH, Pakistan, January 14 (CDN) — Two Pakistani Christians who were shot at a wedding on Dec. 26 for refusing to convert to Islam are still receiving treatment at a hospital intensive care unit, but doctors are hopeful that they will recover.
In low, barely audible voices, Imran Masih, 21, and Khushi Masih, 24, told Compass that two Muslims armed with AK-47s in Punjab Province’s Chak (village) 297-JB, in Toba Tek Singh district, shot them in their chests after they refused orders to recite the Islamic creed signifying conversion.
Soon after they arrived at the wedding, a group of Muslim youths armed with AK-47 assault rifles surrounded them and began shooting into the air, as is customary at village weddings. They were not alarmed, they said, assuming the young Muslim men were simply celebrating joyfully.
“One of the green-turban-wearing Muslims peremptorily told us to recite the Islamic holy Kalima [profession of faith] or face direct bullets and the lethal consequences,” said Khushi Masih.
Both Christians said that they joyfully refused, and instead they began reciting Psalm 91.
“Our decision infuriated them,” Imran Masih said, “and instead of shooting into the air, they shot us, leaving us only after being convinced that we were dead. Praise the name of Lord Jesus Christ, who raised us from the dead!”
The fathers of the two Christians found their sons collapsed in a puddle of blood and rushed them to Tehsil Headquarters Hospital. Imran Masih sustained two broken ribs from the shots, with one bullet passing two millimeters from his heart. Khushi Masih was wounded in the chest and right leg. Bullets from an AK-47 do less harm if they pass through the body than if they become lodged in the flesh and begin to fragment.
“They are recovering fast and their wounds are healing, but they were still under strict observation in the intensive care unit,” said the father of Imran Masih. He added that doctors are concerned for their lives but believe they will recover.
[…]
The fathers of the two Christians said Islamic extremist Hafiz Aziz Gujjar, a member of a local hard-line proselytizing group, has long pressured the two victims to convert to Islam. They said Gujjar has enticed or pressured other Christians and followers of other faiths to recant their beliefs.
With a mixture of sorrow and pride, the fathers said that their sons remained firm in Christ, shedding blood but refusing to surrender their Christian vows.