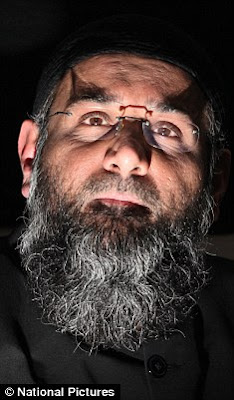 The term, “a waste of the tax-payers money” couldn’t be any more relevant in this farcical situation in Britain. Not only is this Islamic slime-boy on the dole, he also loathes and actively works against the country paying his upkeep. If there were any justice in the world, Anjem Choudary would be dropped into a pit with a gay gorilla.  KGS

Hate preacher Anjem Choudary is being given round-the-clock police protection following his controversial threat to march through Wootton Basset, the Daily Mail can reveal.
Even though the extremist cleric has now called off plans to stage the protest, carrying empty coffins through the town where Britain honours its war dead, he still receives hourly security checks at his East London home.
Metropolitan police officers have been told to give his protection priority above other local policing jobs such as muggings, theft and foot patrols.
The protection was revealed after Home Secretary Alan Johnson yesterday banned Choudary’s Islam4UK group, making it a criminal offence to be a member.
As Choudary held a press conference to react to the ban, patrol cars and unmarked vehicles were still instructed to drive past his empty £320,000 rented home – which is funded by council benefits.

[…]
A police source said that since the checks began last week, they had already taken up around £2,500 of police time, often occupying beat officers for entire shifts if counter-terror detectives are not available.