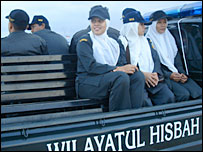 They exemplify everything that sharia has to offer

A serious blow to the credibility and morality of Sharia police in Aceh province, has occurred after several members were detained for an alleged gang rape in Langsa regency.
Police in the regency said Tuesday they had arrested two Sharia police officers, or Wilayatul Hisbah, for reportedly raping a female detainee at the Langsa Sharia Police Station.
The Langsa Police are also hunting down another suspect who is currently on the run.
Langsa Police chief Adj. Sr. Comr. Yosi Muhammartha said the three suspects were accused of jointly raping a university student when she was held in a cell at the station.
The woman was gang-raped by the three Sharia policeman during her interrogation, he added.
Yosi said the issue began when Sharia police officers were conducting patrol on the night of Jan. 8, and found a couple on the side of the PTPN-1 Langsa ring road.
The police brought the pair to the Sharia police office in Langsa. The suspects then questioned the couple in relation to violating the 2003 Sharia Public Indecency Bylaw.
H/T: TROP