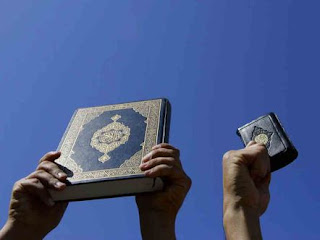 The recent outbursts of Islamic violence springs from the same well of intolerance,…the Koran. KGS

(ALGIERS, Algeria) — Islamists looted and burned a Protestant church in Algeria, the congregation’s leader said Monday, suggesting they were inspired by a recent wave of religious intolerance in the Arab and Muslim world.
The church — hosted in an apartment block in the city of Tizi Ouzou some 100 kilometers (60 miles) east of Algiers, the Algerian capital — was ransacked and set ablaze on Saturday night, several Algerian newspapers said.
The independent El Watan daily published a picture of a smoldering pile of pulpits and desks that had been brought outside for destruction. It quoted the pastor of the local Pentecostal community, Mustapha Krireche, as saying worshippers fled the temple because local police had left a gathering of anti-Christian rioters unchecked.
The congregation was worshipping in the apartment block because it had not received official government approval to operate a church.
Mustapha Krim, the head of the Algerian Protestant Church association, said in a telephone interview with The Associated Press on Monday that looters also set fire to a pile of Bibles and religious textbooks, and desecrated Christian crosses.
He said the looting showed “Islamist intolerance considers there is no room for Christian religious practices in Algeria,” and alleged it was “fueled by what just happened in Egypt,” where six people were killed in a church shooting during Christmas celebrations. In mainly Muslim Malaysia, nine churches have also been recently burned down amid violence against the country’s Christian minority.
The Protestant Church in Algeria filed five separate complaints for arson and looting with local authorities, Krim said Monday.
“Authorities don’t want to get involved because they’re worried of getting in trouble with the Islamists,” Krim said.
Read more: