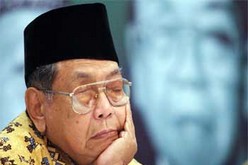 What’s there not to like? A Muslim leader who liked Jews and visited Israel, maintained good contacts with leaders of other religions, spoke about human rights and worked against the antisemitic thinking of his co-religionists.
On the face of it, the late Abdurrahman Wahid was the real deal. There are some curious things about his Islamic views however that need to be examined closer. While the Tundra Tabloids applauds the deceased cleric and ex-president’s views on Wahhabist/Salafist Islam, the point he tries to make concerning the Saudi founded sect being a heretic ideology, not representing true Islam, just doesn’t pass the muster.
There was an op-ed written by the late ex-president in the Wall Street Journal, and at first glance, it looks like his style of Islam is a very impressive departure from what we in the West have come to know about Islam in general. But again, there remains much unsaid in his op-ed about exactly where the Wahhabists and Salafists get it all wrong, and how these “renegade” Muslim sects misunderstand Mohamed’s call to kill the Jew and the unbelievers and subjugate them.
There is nothing said about the umpteenth number of passages in the Koran and Hadiths that contain antisemitic verses that lead Muslims all around the world who have never even met a Jew, to be antisemitic. No, there is much left unsaid by Aburrahman Wahid.  Here is a portion from Robert Spencer’s article discussing Wahid’s WSJ op-ed, in which he takes notice of a point raised by Wahid concering the difference between Wahhabist jihad ideology and tradtional Islamic view:

Robert Spencer: “Pretty much the only thing that distinguishes the jihad theology of the Wahhabi/Salafi “minority fundamentalist religious cult” from the jihad theology of all the eight schools of Islamic law (madhahib) is that the Wahhabis are much more willing than the traditional schools to declare other Muslims to be unbelievers and wage jihad against them. The teachings about offering unbelievers conversion, subjugation or death are not significantly different.”

The Tundra Tabloids advises that you read both the WSJ op-ed, as well as Robert Spencer’s response to it, and you decide for yourself whether or not Wahid was holding back, or whether or not Spencer was reading too much into it. The TT deems truthfullness to be the standard by which all things are measured, and find Spencer’s observations to be most illuminating.
While it’s totally understandable why Jews would be willing to look at Wahid as a true friend, seeing that openly friendly Muslim clerics and ex-leaders of Muslim countries are far and few between, it still doesn’t wipe away the fact, as the TT believes, that Wahid wasn’t honest or forthcoming at all about Islam and what it really stands for. It’s ironic that a man who could come so close to the truth, would choose to remain in the end, so far from it. KGS

The legacy of a true friend

“Before rising to the top of Indonesian politics, Wahid was an Islamic scholar of note who led the largest Muslim organization in the world, the 40-million-member Nahdlatul Ulama (NU), for 15 years. Using his brilliant intellect and impeccable Islamic pedigree, he synthesized traditional Islamic scholarship with his own studies of Western literature and culture. He went on to employ both these elements in a life devoted to the struggle for religious understanding, ethnic tolerance and human decency in Indonesia and internationally. He became a principled defender of minority rights, a powerful voice for democracy and a leading international promoter of an inclusive and tolerant Islam.”