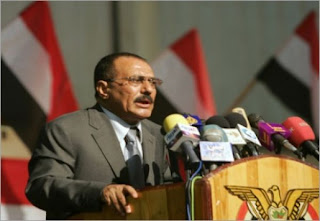 President Ali Abdullah Saleh: Come and lay down your weapons
and pick up paint brushes, canvas and easels instead

SAN’A, Yemen (AP) — Yemen’s president said he is ready to open a dialogue with al-Qaida fighters who lay down their weapons and renounce violence, despite U.S. pressure to crack down on the terror group.
The United States has complained in the past that Yemen struck deals with al-Qaida fighters and freed them from prison after they promised not to engage in terrorism. Some later broke those promises and are now believed to be active in al-Qaida’s offshoot in Yemen.
President Ali Abdullah Saleh vowed that his government is ”determined to stand up to the challenges” of al-Qaida and that his security forces will track down as many al-Qaida fighters as possible among those who refuse to stop violence.
But he left the door open for negotiations.