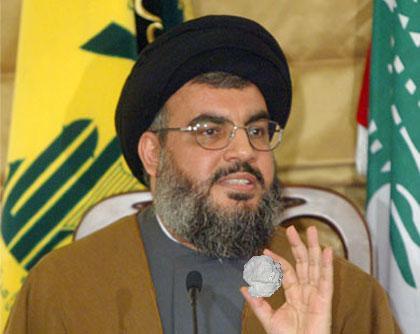 Hassan Nasrallah: This rock of coke
will bring us at least a couple of Klashnikovs

German investigators are uncovering the drug-smuggling business of the Syrian-backed Lebanese militant organisation Hezbollah, moving cocaine from Beirut into Europe via Frankfurt airport.
A report in Der Spiegel magazine this weekend said initial suspicions that Hezbollah was raising funds by smuggling cocaine were raised in May 2008 when around €8.7 million in cash was found in the luggage of four Lebanese men at Frankfurt airport.
A further €500,000 was found in the flat of one of the suspects, in the Rhineland Pfalz town of Speyer.
Two Lebanese men were arrested in October 2009 when customs officers and federal criminal police agents raided a house in Speyer.
The magazine says the suspicion is that family members have been regularly moving millions of euros raised in the European cocaine trade, via Frankfurt to Beirut. Those receiving the money in Lebanon are said to be members of a family with contacts with the highest levels of Hezbollah command including leader Hassan Nasrallah.
A close relation of the suspects has rejected all the allegations, the magazine reported