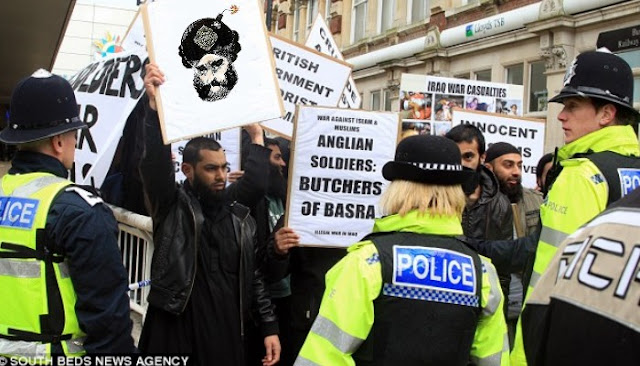 Munim Abdul: It’s like calling a paedophile a paedophile, that’s what he is.
Guess what? Abdul’s right, we should be free to call a paedophile a paedophile! Mohamed, the paedophile prophet of the cult of allah’s Islam, was indeed a paedophile, something of which Islamic texts, imams and clerics testify to and validate as a proper practice to partake in, even in this modern age.
The British should be ashamed of themselves for having a law on the books that would allow for the hauling into court anyone saying anything deemed “offensive”. Such a law is offensive all by itself, being anti-free speech, and anti-democratic in spirit and in deed. Free speech laws protect the rights of those using speech  deemed “offensive”, not the stuff that everyone finds fluffy, comfortable and nice.
The TT finds it highly ironic that the British court system is using these laws against the Mo worshippers, but not against the hundreds of thousands of people that marched through the streets of London shouting either death to Jews, or hanging effigies of Tony Blair and GWBush accompanied with cries of murderers and butchers. The best thing for the British courts to do, is to do away with “wrong” speech laws entirely and let the people speak their minds freely, which means for all, not just a select few. KGS

Two Muslim men accused of calling British soldiers murderers, racists and baby killers during a homecoming parade told a court their words could not be seen as offensive because they were speaking the truth.
Shajjadar Choudhury, 31, and Munim Abdul, 28, are two of seven defendants charged with public order offences at the parade of the 2nd Battalion The Royal Anglian Regiment, known as The Poachers, in Luton on March 10 last year.
They and Jalal Ahmed, 21, Yousaf Bashir, 29, Jubair Ahmed, 19, Ziaur Rahman, 32, and Ibrahim Anderson, 32, all from Luton, deny using threatening, abusive or insulting words or behaviour likely to cause harassment, alarm or distress at Luton Magistrates’ Court.
During the five-day trial, the court has seen video footage showing the men holding placards branding the soldiers ”Butchers of Basra” and had shouted chants including: ”British soldiers murderers, British soldiers terrorists”, and ”shame on you”.
Mr Abdul told the court they believed they were speaking the truth, so their words could not be offensive.
He was asked by Neil Mercer, defending him: ”Did you intend to offend, insult, harass, alarm or distress anyone?”
He replied: ”No. We chose our words carefully and selected them in order not to harass, alarm or distress anyone.”
He said they had not aimed their words at individual soldiers, but at the British forces in general.
He said: ”We are judging the British forces as a whole entity.
”Basically we are saying they are murderers. We mean the whole entity, i.e. the British forces, that they are a murdering entity, and condemning them as a whole, not individually.”
Mr Abdul told the court that when he referred to British soldiers as murderers, he meant it literally because they had killed people in what he saw as an illegal war.
He said: “Because the war in the first place is illegal, so subsequently anyone they kill is murder.”
He said the phrase “British soldiers, go to hell” reflected his belief that if people commit sins they will be sent to hell rather than paradise.
Mr Abdul told the court he had been part of a similar protest in Luton the previous year, where they had chanted similar things and held similar placards.
He said there had been no arrests and nobody had made official complaints as far as he knew.
He said: “We did not get the hostile crowds like we did last year.
“In fact we were able to engage with the people, with debate and discussion.”
Mr Mercer asked: “Did you think that your placards or the slogans you were shouting might be offensive?”
“If it’s the truth, no, and it’s the truth,” Mr Abdul replied.
Avirup Chaudhuri, prosecuting, suggested Mr Abdul used the words to insult and abuse people and was aware that they would have that effect.
Mr Abdul said he completely disagreed. He said: “If it’s the truth then there’s no way they would find it upsetting.
“It’s like calling a paedophile a paedophile, that’s what he is.
H/T: Vlad Tepes