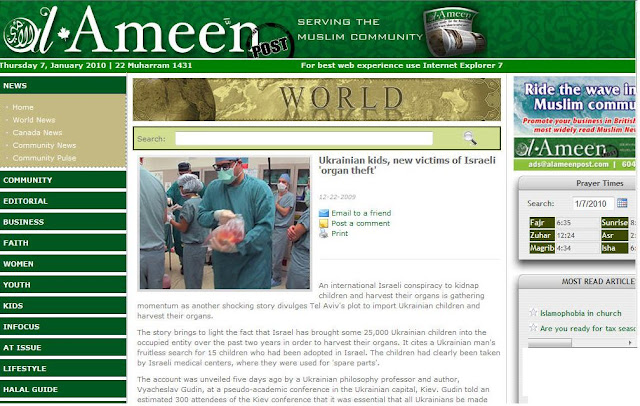 UPDATE: There was a question in the comments to the article by commentor Kai: “Does the BCMA receive any provincial or federal funding? If so, Campbell should be out front and center for BC, telling the BC People that the Province will no longer fund the BCMA, or similar groups.” Well the Tundra Tabloids found the following that answers that question, from the BCMA’s own website:

“The BCMS meets and surpasses all curriculum requirements set by the Ministry of Education and as such is accredited and receives full funding pursuant to the Independent Schools Act from the provincial government.”
So the Canadian government is directly involved with a Muslim paper that’s spreading an antisemitic blood libel. This is all going mainstream right now, what gives?

This story comes to the Tundra Tabloids by way of Vlad Tepes and blogger, Terry Glavin. A very influential Muslim daily newspaper in Canada, the Al-Ameen, picks up an antisemitic story manufactured by Press TV, the propaganda wing of the Iranian government, that spreads the lie of Israel harvesting organs of Ukranian children over a period of two years.
The Al-Ameen is the house journal of the British Columbia Muslim Association, wealthy cultural organization in Canada, and according to Terry Glavin, “the periodical’s editorial board is in fact the executive committee of the BCMA“.
One would think that the notorious Canadian Human Rights Commission (CHRC) would be all over this like white on rice, but to date, nothing of a peep has been heard from that anti-free speech organization. Shining the sunlight on the Al-Ameen (that parades itself as a legitimate newspaper) is the correct response, as well as dishing out deserved condemntation to the editors of the paper.

If the Israelis wish to lodge a formal complaint in a court of law for libel, that is their just right to do so. This also goes to show just how much damage the Swedish papaer Aftonbladet and Donald Boström have done with their original blood libel series, which gave life to new accusations against the Jewish state of Israel. KGS

NOTE: Read Terry Glavin’s article in full, as well as the comments. The TT agrees with Glavin in 99.5% of what he says, but there is no room for state organizations like the CHRC.