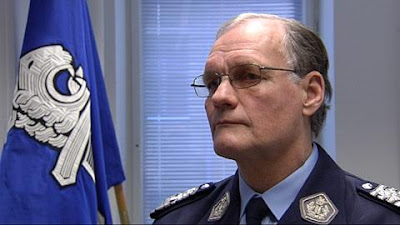 National Police Commissioner Mikko Paatero:
It’s just too unrealistic right now
It shouldn’t be unrealistic. The deportation of foreign criminals, especially if they are still citizens of their country of birth, should be a rather easy policy to implement, all that’s needed is the political will to put into action the badly needed state policies yet to be passed by Finnish lawmakers. There really isn’t too much standing in the way of enacting smart policies, if the political will is there. KGS

Ibrahim Shkupolli, who killed five people and himself in Espoo on December 31, could not have been deported without significant changes to Finnish immigration practices, say top law enforcement and immigration officials.
In recent days, Prime Minister Matti Vanhanen and Interior Minister Anne Holmlund have publicly questioned why Shkupolli, a Kosovo Albanian, was allowed to remain in Finland despite several criminal convictions and a rejected citizenship application.
If politicians intend to lower the threshold for deportation to a level that might have prevented the Sello shopping mall shootings, major changes would have to be made to current legislation.
“Our judicial and administrative court procedures would have to be changed significantly,” National Police Commissioner Mikko Paatero told YLE. “Hundreds of people who would have to be deported.”