The greatest libel in the Muslim world:
Call a Muslim leader a Zionist
Hey, like the Tundra Tabloids said, when it’s Muslims killing Muslims, the world yawns. The reason for describing the border as “mysterious”, is due to the fact that the Main Stream Media continue to pimp the meme that Israel controls all the borders of Gaza, when in fact, the Egyptians maintain their own controls on the southern border with Gaza. KGS

Egyptian security forces and Palestinians clashed at the Gaza border on Wednesday over the delay of an international aid convoy, killing one Egyptian border guard and wounding 10 Palestinians.
The Egyptian state news agency said Palestinians shot and killed the border guard who was in a observation tower overlooking the frontier. Nine other guards were injured by stones.
Hamas had called for a protest earlier over the delay of an international aid convoy at the nearby Egyptian port city of El-Arish, but soon lost control of the situation as hundreds of youths began hurling rocks across the border at the guards.
Hamas police fired shots to disperse the crowd and shots were also heard from the Egyptian side the border. Palestinian health official Moawiya Hassanein said the Palestinian injuries were from gunfire and tear gas.
The incident follows a late night clash between international pro-Gaza activists and Egyptian security clashed at the nearby Mediterranean port of El-Arish when Egypt refused to allow part of the convoy to enter its territory and move on to Gaza.
More than 50 activists and over a dozen members of the security forces injured. Activists briefly seized some policemen as well.
The clashes add to the embarrassment of Egypt, which has come under fire from Arab and Muslim groups for cooperating with Israel in its 28-month blockade of the impoverished territory. The blockade was imposed after Hamas violently seized control of the territory from the forces of Palestinian Authority President Mahmoud Abbas.
More than 500 international activists accompanied the convoy organized by the British-based group Viva Palestina, bringing tons of humanitarian supplies, as well as vehicles, to Gaza. The group includes British, American, Jordanian and Turkish activists and lawmakers.
The scuffles at the port broke out late Tuesday at al-Arish port building when authorities told the organizers that out of the nearly 200 vehicles, some 59 can’t enter Gaza through Egypt, but must go through Israeli terminals.
A security official said the vehicles in question are carrying pickup trucks, sedans, generators and other equipment, which are not allowed to pass through the Egyptian crossing at Rafah and had to go via Israel. Only medical aid and passengers are allowed through, the official said. 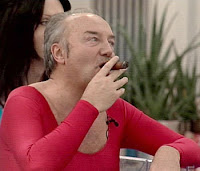 British MP George Galloway told Sky News television that the activists were negotiating with authorities and refusing to leave behind their vehicles.
“We refused this because it’s a breach of the agreement which we reached,” he said. “It is completely unconscionable.”