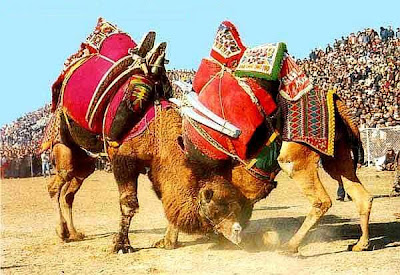 OR THE ONE THAT COLLIDES PARTICLES?

The fact that a barbaric civilization (Islam) is currently clashing with the one based on logic, reason and civility (the West), is not what’s important, but how that civil society understands the threat arrayed against it, and is prepared to defend itself from extinction. Its resolve is what matters most, not the battle.
So keep the camel wrestlers in mind as you decide which civilization would best serve your own self interests. Remember folks, like it or not, we, and our future generations will be effected by the outcome, whether it’s for the good or the bad. So get involved. KGS
NOTE: Special thanks to Vlad for CERN Collider idea.