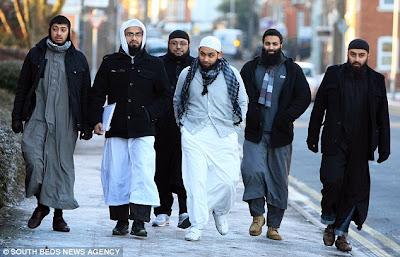 THEY DO AS THEY PLEASE
If the British court system wasn’t full of bed-wetting ninnies, these seven jerks walking the streets of England in bed clothes would be forced to choose between either, obeying the law or doing what they like, but with a cost.
Making choices is a part of our every day routine, so there is nothing immoral nor illegal with the British court system making the accused to choose between paying a hefty fine and jail time for being in contempt of the court, or behaving themselves like everyone else and show the court due respect. KGS
The Muslims haven’t a leg to stand on:

Seven Muslim protesters accused of screaming insults at soldiers during an Iraq homecoming parade refused to stand for a judge yesterday.
The men are alleged to have shouted ‘murderers’, ‘rapists’, ‘terrorists’ and ‘baby killers’ while waving placards at the 2nd Battalion Royal Anglian Regiment marching through Luton.
At the town’s magistrates’ court, they denied using threatening, abusive, insulting words and behaviour likely to cause harassment, alarm and distress to others.
After refusing to stand they were threatened with being found in contempt of court by a clearly angry District Judge Carolyn Mellanby.
They insisted it was a ‘grave and cardinal sin’ to show anyone other than Allah respect by standing.
Eventually, a compromise was reached where they would enter the court after her during the trial, which is expected to last six days. The maximum penalty each of the men can receive is a £1,000 fine.
The defendants were given an extra 20 minutes on top of their lunch break to go to pray at a mosque a few minutes’ walk away.
A separate ‘quiet’ room has been set aside for their regular prayer intervals for the rest of the week. The seven accused men are Munin Abdul, 28, Jalal Ahmed, 21, Jabair Ahmed, 19, Yousaf Bashir, 29, Shajjadar Choudhury, 31, Ziaur Rahman, 32, and white Muslim Ibrahim Anderson, 32, all from Luton.
They are alleged to have chanted: ‘British army murderers’, ‘British soldiers burn in hell’ and ‘Baby killers shame on you’.
[…]
Despite the nature of the allegations against them the seven men did not appear in the dock because they are not charged with an imprisonable offence and are not in custody. When they refused to stand, Judge Mellanby said: ‘It is procedure that all people stand when I come into court. I am asking them to defer to conventional practices in respect to the court. I’m not asking them to stand for me.’