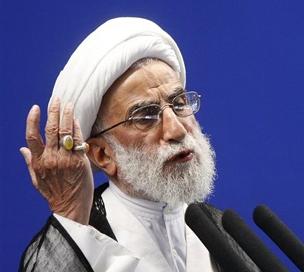 Ayatollah Ahmad Jannati:
Bring back the good ol’ days
Reinhard informs the Tundra Tabloids that Jannati’s use of the Koranic verse 5:33, is of importance, since 5:32 is used by apologists for Islam in promoting the myth that Islam is a religion of peace:

5:32: “For that cause We decreed for the Children of Israel that whosoever killeth a human being for other than manslaughter or corruption in the earth, it shall be as if he had killed all mankind, and whoso saveth the life of one, it shall be as if he had saved the life of all mankind. Our messengers came unto them of old with clear proofs (of Allah’s sovereignty), but afterwards lo! Many of them become prodigals of the earth.”
5:33 “The only reward for those who make war upon Allah and His messenger and strive after corruption in the land will be that they will be killed or crucified, or have their hands and feet on alternate sides cut off, or will be expelled out of the land. Such will be their degradation in the world, and in the Hereafter theirs will be an awful doom…”

Standoff in Iran Deepens With New Show of Force

[…] The government and its hard-line supporters continued to rely on force, and the threat of force, to quell protests and demand loyalty, while the opposition refused to back down. There was no indication that compromise was on the agenda.
During Friday Prayer services in the capital, Ayatollah Ahmad Jannati, a fundamentalist cleric who leads the powerful Guardian Council, called protesters “flagrant examples of the corrupt on Earth” and effectively urged that they be executed as “in the early days of the revolution.”