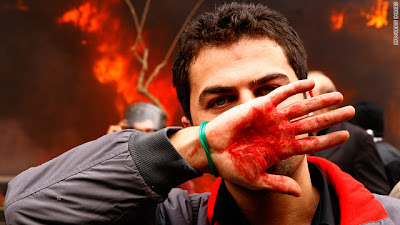 This proves that the Tundra Tabloids’ claim about the anti-Iranian regime protest movement to have been correct, that there are a host of differing groups represented in the streets that are battling with the current Iranian regime. This interview of a university student shows just how difficult of a time the pro-Western/anti-Islamic protesters are going to have in countering that desert idiology that has wrecked their country from the moment it showed up on their doorsteps. KGS

Iranian protester: ‘We are not radicals, not against Islam’

(Al-CNN) — Since June, he has been among thousands to take to the streets of Tehran in support of reform for his country.
He has braved police violence and government reprisals. He has seen fellow opposition supporters felled by the batons and bullets of government security forces.
But this 28-year-old university researcher says he has no choice.
“I’m afraid but … it’s not a good way just to sit at home and do nothing,” the protester, who asked to be identified only as “Hesam” for safety reasons, told CNN. “If I want to change the condition, if I want to have a better life, I have to do that. Yes, maybe it’s a death wish.
His wish is simple — a democratic Iran.
“We are — like it or not — (becoming) … a multicultural and multireligious country,” he said, calling for the same freedoms common to “most of the democracies of the world.”