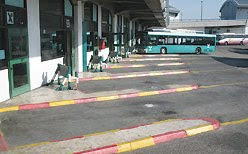 Dry run, or nabbed before they could
get their hands on explosives?

Three terror suspects carrying large bags were arrested on Sunday afternoon, after they raised the suspicions of security guards at the Beersheba central bus station.
The three were suspected of attempting to carry out a terrorist attack, and were arrested after they refused to stop for a security search. After the arrests, the suspects’ bags were transferred to police sappers, who were looking for explosive materials or devices.
Security forces evacuated all civilians, including passengers and shopkeepers, from the area.
A Beersheba Police department source told Israel Radio that one bag had been cleared as containing nothing suspicious, and that at least two of the three suspects were in Israel illegally. A spokesperson told Army Radio that searches were continuing, though nothing suspicious had been found.
All security forces in the area were put on high alert.
There were no reports of shots fired or casualties in the incident, and police were scouring the area for further suspects.