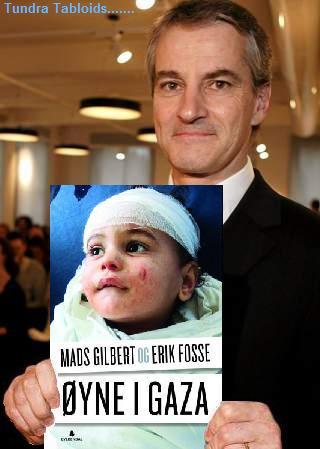 FM Store: What’s wrong with my praising
a book the Norwegian government funded?
The present Norwegian government is beyond contempt, it has crossed over from being just (typically) overly critical of Israel, into being openly hostile of Israel and anti-Semitic as well. The Norwegian government funded a project by Gilbert and Fosse, which involved their traveling to Gaza in order to cover the war between Israel and Hamas,  and then publish a book about their experiences.
The Tundra Tabloids believes that it’s entirely possible that they (Gilbert, Fosse and the Norwegian government) saw a chance to circumvent the Israeli ban on the media’s coverage on the war in Gaza, and travel there under the guise of offering aid to the civilian population, but with the main intention to act as conduits for Hamas’ propaganda.

It’s a fact that they became the de facto “mouthpiece” for the Hamas during the war, dishing up one false story after another. Here’s the video once again of Mads Gilbert and his Arab helper in an arranged scene for the CNN camera, where he makes up dialogue as his colleague gives fake heart compressions to an already dead, or even healthy boy faking it for the camera.

It’s a sad state of affairs no matter how you look at it. If the boy was indeed dead, it’s a tragedy, but it also shows the lengths at which these (supposedly) medical professionals are willing to throw their proffessionalism out the window, in order to present Israel in the worst light possible. This also shows the present Norwegian government’s willingness to be complicit in the spreading of blood libels against the Jewish state of Israel. KGS 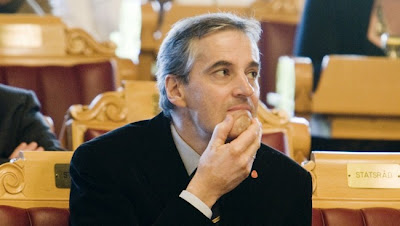 Norwegian minister under fire for praise of Cast Lead book

The Norwegian foreign minister’s praise for a controversial book accusing Israeli troops of perpetrating a “monstrous, systematically implemented and comprehensive massacre” in Gaza aroused harsh criticism yesterday from Israeli officials and Jewish organizations.
Deputy Foreign Minister Danny Ayalon told Haaretz that the book being endorsed by Jonas Gahr Store is “outrageous and borders on incitement made up of fabrication and lies.”
“It is problematic that a representative of a democratic government is praising such things,” Ayalon added.
The book in question is called “Eyes in Gaza,” written by Mads Gilbert and Erik Fosse after their stay in the Strip during Operation Cast Lead last year.
Dr. Moshe Kantor, president of the European Jewish Congress, said he was “deeply disappointed” by Store’s endorsement of “slanted and baseless libel.” “Norway, which I hope will continue to live far away from terrorism, needs to know that such statements feed and assist the terrorists,” Kantor said.
“As can be recalled, journalists and reporters were not allowed into Gaza,” a spokesperson for the Norwegian foreign ministry said when asked about the back-cover praises which Store wrote for the highly controversial book.
“When war rages, civilians are made mute,” Store wrote, adding that Fosse and Gilbert “told of what they saw. It was not their duty, but their responsibility. When military might fences out all voices, the few which remain become extra strong and important.”
The two celebrity physicians and political activists from the Norwegian far-left frequently visit the Gaza Strip and the West Bank as part of the government-funded medical nonprofit NORWAC, and are among Norway’s fiercest critics of Israel.
Gilbert defended the book to Haaretz as “accurate testimony.” “It turned out to be true. There was a massacre. It was no mistake, but obviously a planned, systematically implemented military operation of the Israeli army,” Gilbert and Fosse wrote, describing an incident in which they said IDF forces put a family into a house “only to bomb the house the following day, full of people.”
The IDF spokesperson said no families had been targeted during Operation Cast Lead.
Another passage in the account by the two doctors reads: “The Israelis knew well what they were doing. The purpose was to collectively punish the entire Palestinian population of Gaza [with] a merciless slaughter of women and children, old and young, men and women.”
Cecilie Willoch, press officer for the Norwegian foreign ministry said that Store “expressed his personal appreciation of the medical and humanitarian work of Drs. Gilbert and Fosse in Gaza. The lack of access for the media made [these] important for international media.” She added that Store has “underlined” the fact that Gilbert and Fosse “only represent one voice” of what took place.
Earlier this year Foreign Minister Avigdor Lieberman accused Norway of “promoting anti-Semitism” and pursuing a “hostile policy” toward Israel.