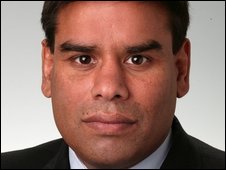 Khalid Mahmood: “The fact is the majority of people who have carried out or planned these terror attacks have been Muslims.”

Mahmood dares to speak in public what other politicians dare say only in private. In order to provide a more secure public transportation network, religious profiling needs to become part of the overall policy in screening for potential terrorists. KGS

Muslim MP: security profiling at airports is ‘price we have to pay’
Khalid Mahmood, the Labour MP for Birmingham Perry Barr, said it had become necessary to ‘profile’ passengers from certain racial and religious groups in order to weed out possible terror suspects.
He said: “I think most people would rather be profiled than blown up. It wouldn’t be victimisation of an entire community.
“I think people will understand that it is only through something like profiling that there will be some kind of safety.
“If people want to fly safely we have to take measures to stop things like the Christmas Day plot. Profiling may have to be the price we have to pay.
“The fact is the majority of people who have carried out or planned these terror attacks have been Muslims.”
Muslim opinion on the subject was split yesterday, with some groups objecting to any such move for fear of alienating large sections of the community.
Read it all here.