Fazl-e-Akbar: “It’s just a disaster. I can see flesh, bodies and wounded all around,” 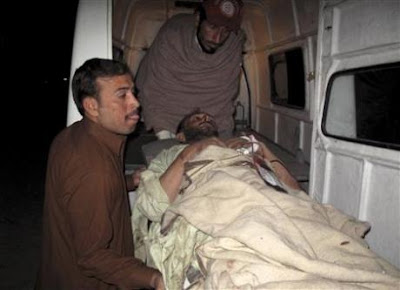 Victimized for not following 100% of Islamic teachings
More pain and sorrow delivered by the somehow misguided followers of the prophet from the cult of allah’s Islam. How do these jihadis consistantly get it all wrong? KGS

ISLAMABAD (Reuters) – A suicide bomber blew himself up in an SUV at a volleyball game in northwest Pakistan on Friday, killing 88 people in a village that opposes al Qaeda-linked Taliban insurgents, police said.
The bomber struck as young men played volleyball in front of a crowd of spectators, including elderly residents and children, near the town of Lakki Marwat, officials said.
The bloodshed will put President Asif Ali Zardari’s efforts to fight the Taliban under greater scrutiny, pressure he does not need at a time when corruption cases against his allies could be revived.
“It’s just a disaster. I can see flesh, bodies and wounded all around,” Fazl-e-Akbar, a witness, told Reuters by telephone. “It’s dark. Vehicles’ headlights are being used to search for victims.”
Local police chief Ayub Khan said the bomber blew himself up in his sport utility vehicle in the middle of the field. A second vehicle was believed to have fled the scene.
“We have removed all bodies and wounded from the rubble,” Khan said, adding that 88 people were killed.
It was one of the bloodiest bombings in U.S. ally Pakistan since the October 2007 attack that killed at least 139 people when former prime minister Benazir Bhutto, Zardari’s wife, returned home from self-imposed exile.
An attack on a sporting event is highly unusual, but could be part of the militants’ strategy of bombing crowded areas such as markets to inflict mass casualties and spread fear and chaos.
VILLAGE MILITIA
Police said the village had formed an armed anti-Taliban militia, a phenomenon that started in Pakistan last year.
Despite major military offensives against their strongholds, the Taliban have killed hundreds of people in bombings.
Britain’s Foreign Office described the attack as horrific and said it underlined the urgent need to fight extremism.
“It is a threat that the international community must help Pakistan to tackle, in the interests both of Pakistan’s people and of wider stability,” it said in a statement.