Mousavi: I’m just the public face for threatened
corrupt mullahs worried about their fortunes
Like the Tundra Tabloids has been saying from the very beginning, there is more to this unrest than meets the eye. There are Iranian dissidents who are friendly with the west and in favor of bettering relations with Israel, as well as stopping all aid to the Palestinians which ends up funding their dirty terrorist war against the Jewish state. These are the people we want to see gain power in Iran.
The other Iranian  ‘dissidents’ however, are mere mouth pieces for the equally dictatorial, and highly corrupted mullahs, who fear the loss of their wealth and tradtional power bases of support, due to the present government’s policies on reforming the Iranian revolution (in other words, back to revolution basics 101).

Both of the sides in this fight, at least the major players, do not have any intention of reforming Iran the way the west envisions. While the TT is entirely sympathetic with the faction of true reformists in Iran, presently defying the regime, the rest spell more misery for the Iranian people if they ever come to power.

These are just some of the Iranian dissidents:
(courtesy of Vlad Tepes) These women however, represent the true reformers
and deserve all of our support possible! 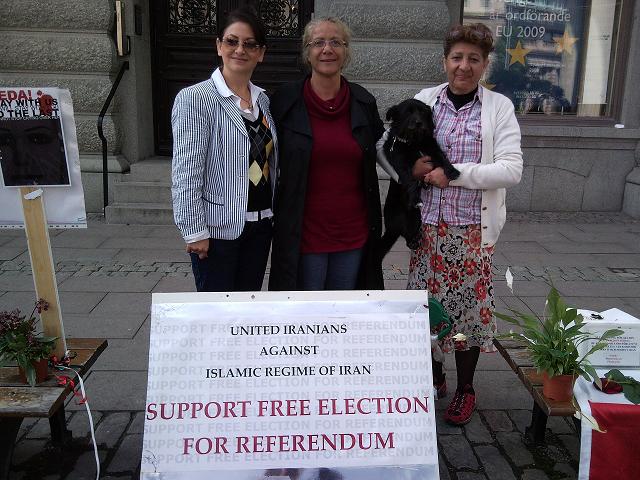 These women told the Tundra Tabloids this past July (2009) that Mousavi, the communists and the various Muslim factions taking to the streets are just thugs, bent on authortarian rule. The west needs to support groups like, “The United Iranians Against the Islamic Regime of Iran”, and others like them, not Mousavi and ilk. KGS

Iran’s opposition leader expressed his defiance in the face new threats – including calls by hard-liners for his execution – saying Friday that he is ready to die in defense of the people’s rights.
Mir Hossein Mousavi’s remarks come after the worst unrest since the immediate aftermath of disputed June presidential election.
At least eight people died during anti-government protests Sunday, including Mousavi’s nephew. Mousavi lashed out at the bloody crackdown the authorities are waging against the opposition.
He said in a statement on his Web site the government was making more mistakes by resorting to violence and killings.
Mousavi said he’s “ready for martyrdom” – the sacrifice of one’s life – and that authorities must recognize the people’s right to peaceful protests.