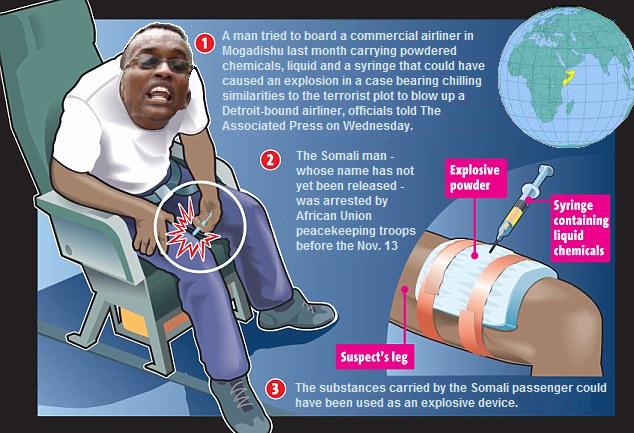 No matter if the material proves to be a different explosive, this looks like a real connection with the Detroit Ball Bomber terrorist attack attempt. KGS
Vlad posts this video: “I like this tack by Obama. Sounds almost like he approves of the patriot act but doesn’t have the stones to admit it, and sounds like he would want to make some improvements to it, of the kind that would have got Bush impeached.”

A man tried to board a commercial airliner in Mogadishu last month carrying powdered chemicals, liquid and a syringe that could have caused an explosion in a case bearing chilling similarities to the terrorist plot to blow up a Detroit-bound airliner, officials told The Associated Press on Wednesday.
The Somali man – whose name has not yet been released – was arrested by African Union peacekeeping troops before the Nov. 13 Daallo Airlines flight took off. It had been scheduled to travel from Mogadishu to the northern Somali city of Hargeisa, then to Djibouti and Dubai. A Somali police spokesman, Abdulahi Hassan Barise, said the suspect is in Somali custody.
“We don’t know whether he’s linked with al-Qaida or other foreign organizations, but his actions were the acts of a terrorist. We caught him red-handed,” said Barise.
A Nairobi-based diplomat said the incident in Somalia is similar to the attempted attack on the Detroit-bound airliner on Christmas Day in that the Somali man had a syringe, a bag of powdered chemicals and liquid – tools similar to those used in the Detroit attack. The diplomat spoke on condition he not be identified because he isn’t authorized to release the information.
Barigye Bahoku, the spokesman for the African Union military force in Mogadishu, said the chemicals from the Somali suspect could have caused an explosion that would have caused air decompression inside the plane. However, Bahoku said he doesn’t believe an explosion would have brought the plane down.
A second international official familiar with the incident, also speaking on condition of anonymity because he isn’t authorized to discuss the case, confirmed that the substances carried by the Somali passenger could have been used as an explosive device.
In the Detroit case, alleged attacker Umar Farouk Abdulmutallab hid explosive PETN in a condom or condom-like bag just below his torso when he traveled from Amsterdam to Detroit. Like the captured Somali, Abdulmutallab also had a syringe filled with liquid. The substances seized from the Somali passenger are being tested.