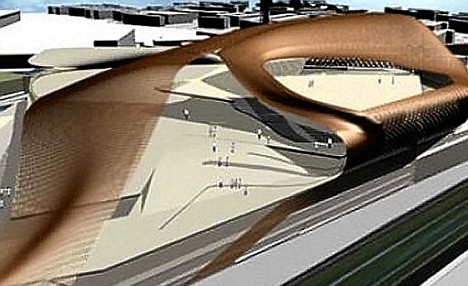 Saudi funded monstrosity linked to terror?
But how could that be if it’s dedicated to the worship of Mo and allah, co-leaders of the cult of Islam?
The Tundra Tabloids is confused and full of amazement that yet, more true believers in that desert Ideology of Perpetual Outrage (IPO = Islam)  have gotten it all wrong, and have taken to the path of violent self inner dialogue and reflection, you know, jihad. Thanks to Gaia for the hat tip on the Daily Mail report. KGS
Revealed: Muslim bomb plot gang’s links to ‘mega-mosque’ in east London
Ministers should review plans to build a “mega-mosque” in the East End in the wake of the airline bomb plot trial, the Tories urged today.
Shadow security minister Dame Pauline Neville-Jones said the case had shown that the group behind the mosque may have given cover to extremist activity.
Tablighi Jamaat, which describes itself an Islamic missionary organisation, is pushing for the mosque to be built next to the 2012 Olympics site in Stratford.
[…]
But intelligence agencies have cautioned that its ability to radicalise young men could lead to jihadist terrorism.
The London Markaz, which some say will be the largest place of worship in Europe, has faced criticism of its backers and allegations of Saudi funding since it was first mooted three years ago.
The complex will include a three-storey Islamic centre able to hold at least 40,000 worshippers and up to 70,000 if necessary.
The plans will have to go before Newham council but Mayor Boris Johnson may have a say and, in theory, it could be called in by the Government
But the group was revealed in court as having links to some of the terror suspects, with several having passed through other mosques run by the group.

NOTE: Best case scenario would be for the entire mega-mosque project to be scrapped once and for all.