“The media portrays Iraq’s Ashura festival as a bloody event with fights between police and pilgrims. We want to remind people that all Iraqis aren’t terrorists” 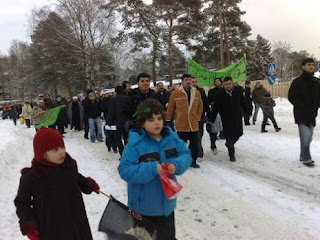 No blood letting for these fellas.
Interesting how they want to give a different version in Finland, to how they really act at home. These peaceful marchers are peaceful, solely because Finnish law would prohibit them from carrying huge knives and packs of swinging blades to cut themselves all up in the city streets. Plus, it’s too damn cold to remove their clothes. KGS

H/T: Esther at Islam in Europe

Iraqis March for Peace in Helsinki

Iraqis in Finland staged a peaceful gathering in Helsinki on Sunday to mark Ashura, a festival for Shi’ite Muslims. Police say the event drew some 200 participants to Helsinki’s Kulosaari district.
The procession, which included people of all ages, made its way from the Kulosaari mosque to the Iraqi embassy.
Event organizer Ahmed al Hillo says the march was a stand against terrorism and restrictions to freedom of speech.
“The media portrays Iraq’s Ashura festival as a bloody event with fights between police and pilgrims. We want to remind people that all Iraqis aren’t terrorists,” says al Hillo.
Finland is home to some 3,200 Iraqis. This was the first time an Ashura procession was staged in the country.