Skip to content
Home
/
2009
/
December
/
27
/
Gaza
/
QUOTE OF THE DAY AS HAMAS MARKS 1 YEAR ANNIVERSARY OF GAZA WAR…….
Facebook
Twitter
Google+
LinkedIn
Pinterest
“We are the victors! We are the fighters!
We are the steadfast!” 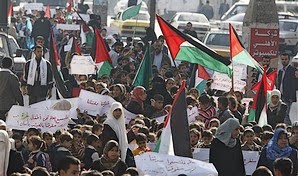 [“I wish they had commemorated the war by opening a factory. That would have been better than this,” said Gaza resident Rami Mohammed, 30.]
The real occupation of the Arabs in the disputed territories in Judea and Samaria, and in the Gaza Strip, is by their own corrupt, genocidal leaders. Nothing will change as long as these immoral monsters are in power, and by the looks of things, they’re not going anywhere anytime real soon. KGS
Hamas marks 1 year anniversary of war, but many stay home
Hamas loyalists marked the one-year anniversary of Israel’s war against Gaza’s Islamic terrorist rulers with defiant protests and a moment of silence on Sunday – even as most of the territory’s residents ignored commemorative events and some even criticized the terrorist group for not attending to their needs instead.
Around 3,000 Hamas supporters milled around a square in the northern Gaza town of Jebaliya, waving their group’s green flags and holding up pictures of family members killed in Operation Cast Lead that began on Dec. 27, 2008. Some 1,400 Palestinians were killed, including as many as 900 civilians, along with 13 Israelis.
“We are the victors! We are the fighters! We are the steadfast!” thundered senior Hamas leader Khalil Hayyeh.
But a year later, Hayyeh’s bold calls rang hollow. After days of heavy advertising through Hamas Web sites, text messages and radio announcements, only a trickle of Hamas loyalists turned up to a commemoration in the heavily damaged legislative building in downtown Gaza City, the territory’s largest urban area.